Palestine and The American Veto: A Dreadful History in Palestine’s Memory

Palestine and The American Veto: A Dreadful History in Palestine’s Memory 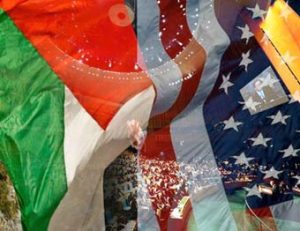 This past September, Palestine waged an important battle in the Security Council for its inclusion as a state with full United Nation membership. The American veto — rejecting and threatening such a step, in addition to other actions that aid Palestinians — made it clear that this world power has no serious solution to the conflict that this people has endured for decades.

The United States, as is now customary, reaffirms its alignment with Israel by using its veto to abort any resolution related to the Palestinian conflict. It has used this authority ten of times in the Security Council with regard to the Palestinian issue to prevent sanctions from being imposed on Israel – a country that bombs, murders, blockades, arrests and divides while destroying the infrastructure of the Palestinian territories.
The unlimited support given to Israel’s Zionist occupation and to its racist government reveals the true face of the US as being opposed to any possible solution to the Palestinian cause, though such a solution could lead to a lasting peace and stability in the Middle East.
Given its partisan policy, the US government will never serve as a fair mediator; rather, it is a hypocritical government that employs double standards. Though it verbally expresses its interest in seeking a solution to the conflict, it supports colonial practices on the West Bank and rejects any solution based on international law. Such a solution could allow the recognition of the Palestinian population’s national and historical rights to create an independent Palestinian state, with Jerusalem as its capital, and the return of the refugees, who currently constitute 65 percent of the population.

The United States describes the Palestinian struggle as “terrorism,” be it the armed struggle endorsed by that same international organization or its popular resistance. Nevertheless the US failed to publically describe its own current struggle against Palestinian at the international level and in the United Nations as “diplomatic terrorism,” though this threatens world stability and peace in the region. These actions were undertaken to rally more support in the new holy war against the alleged Arab “aggressors” and in support of the “defenseless” state of Israel.

Those who still want the United States to be an intermediary in the new rounds of direct negotiations with Israel — without conditions or guarantees — should know that this empire that fails to operate in good faith with respect to the Palestinians. One needs only recall the racist statements made by Republican candidate Newt Gingrich in which he denies the existence of the Palestinian people and considers them an “invented” people. It’s should also be noted thatGingrich is currently leading in the polls to become his party’s aspirant to the White House.

The following are dates when the United States used its veto in support of the Zionist state and its criminal, murderous and racist policy against the Palestinian people.

3/27 –The US used its veto to impede the UN Security Council from accepting a resolution that would permit the creation of a group of international observers acting to protect Palestinians in West Bank and Gaza.
12/14 – Washington aborted a resolution that demanded Israel to withdraw from zones under the Palestinian National Authority and that condemned actions against civilians.
2002
12/20 – Washington frustrated a resolution presented by Syria condemning Israel for killing several UN workers and for the deliberate destruction of a FAO warehouse in Palestinian occupied territories at the end of November of that year.
2003
7/16 – The US maintained its veto against a resolution that protected the life of Palestinian president Yasser Arafat following the Israeli Knesset’s decision to kill him.
7/14 – The US voted against a resolution demanding the destruction of the “Apartheid Wall,” which was constructed by Israel to divide and annex the territories under the control of the Palestinian National Authority and which violates the integrity of lands owned by Palestinian citizens.
2004
3/25 – US again votedagainst a resolution that castigated Israel for the murder of Jeque Ahmad Yassin, the founder of the Hamas Islamic Resistance Movement.
10/5 – Washington frustrated a resolution that called on Israel to cease attacks against North Gaza and demanded the withdrawal of its troops from the area.
2006
7/13 – Due to a US veto, the Security Council failed to pass a resolution demanding the release and exchange of a Israeli soldier detained by Palestinian organizations for the freeing of Palestinian prisoners in the prisonsof the occupation forces. The failed resolution had also demanded the end of intrusionsby Israeli troops into the territories of the Gaza Strip.
2011
2/19 – US voted to defeat a resolution presented by the Arab Group condemning Israeli colonization of the Palestinian occupied territories, though 14 of the 15 Security Council’s permanent members voted in favor of the resolution.

Via Democratic Front For the Liberation of Palestine DFLP

nsnbc international is a daily, international online newspaper, established on 25 February 2013. nsnbc international is independent from corporate, state or foundation funding and independent with regards to political parties. nsnbc international is free to read and free to subscribe to, because the need for daily news, analysis and opinion, and the need for independent media is universal. The decision to make nsnbc international freely available was made so all, also those in countries with the lowest incomes, and those inflicted by poverty can access our daily newspaper. To keep it this way, however, we depend on your donation if you are in a position to donate a modest amount whenever you can or on a regular basis. Besides articles from nsnbc's regular contributors and staff writers, including nsnbc editor and founder Christof Lehmann, it features selected articles from other contributors through cooperation with media partners such as Global Research, The 4th Media, AltThaiNews Network and others.
View all posts by nsnbc international →
This entry was posted in Middle East, Northern America, Opinion, Politics, World and tagged 66th Session of the UN General Assembly, DFLP, Israel, Middle East, nsnbc, Obama, Obama Middle East Solution, Occupation of Palestine, Palestine, palestine statehood, Politics, UN General Assembly, United Nations, United States, zionism, Zionist Occupation. Bookmark the permalink.
Loading Comments...
%d bloggers like this: