Posted on September 2, 2011 by christoflehmann

The Libyan Transitional National Counsil (TNC), has presented a plan that is supposed to transform Libya into a Democracy after a transitional period of 20 month. Provided the conflict is developing according to the TNC´s reported plans and ambitions, the Libya should have a President after the transitional period. The TNC´s spokesperson in the United Kingdom, Guma al Gamaty, states, that the TNC has agreed on a roadmap for the transitional period, and that the entire TNC plans to move from Bengazi to Tripoli within a few days. In a BBC interview al Gamaty also expressed that he hoped that Ghadafi loyalists would surrender to avoid more bloodshed, that he hoped for reconciliation. Ghadafi meanwhile remains defiant, and according to reliable sources as well as Muamar and Saif Ghadafi, loyalists maintain a considerable fighting force, in spite of the relentless NATO bombings. Al Gamaty´s expressed wish for surrender and reconciliation will not least be obstructed by the massacres and summary executions under the leadership of Tripoli military and Al Qaeda commander Abdelhakim Belhadj.  Al Gamaty further expressed that the TNC would honor existing contracts with the UK and other countries. That is of course only possible as long as the conflict and transitional process develops according to the TNS´s hopes.

Concerning the transitional plan, Al Gamaty explains, that the TNC plans to have elected a counsil of approximatly 200 persons by the end of the 20 month transitional period. He did not state how this counsil would be elected and by whom. This counsil would then take over the governing functions from the TNC, and propose a new Libyan Constitution, which shall be voted upon by a referendum. How long it would take for the counsil to work on the constitution is not mentioned, which means that the suggested period of 20 month to bring about “Democracy” is optimistic, to say the least. 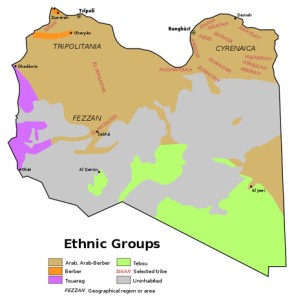 Libya is a complex nation with centuries old tribal traditions. There are over 20 major tribes in Libya, and the subtribes and clans number in the hundrets. One major factor in the success of the Ghadafi lead government was that it embraced the tribes, their traditions and  diversity. Quite to the contrary to whatr western media report, political influence as well as wealth, means for infrastructure and initiatives like the Great Man Made River Project embraced all tribes and regions of Libya while respecting diversity. Not unlike Stalinist practice, the TNC proposes that Libyans should neglect their tribal 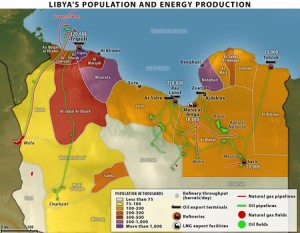 Population and energy production in Libya

affiliations, and focus on the fact that they are all equal, and that they are all Libyans. Unless the members of the TNC have discovered a new technique of social engenering, any social scientist would advise them that centuries old tribal traditions and affiliations can not be eradicated or overcome within 20 month, nor can they within 20 years.  Even though the primacy of respectively the individual vs. the social or culktural self are debatable and debated, it is evident that centuries old ways of perceiving one self, ones family, and extended family as part of a tribe can not be “social enginered”  away within relatively short periods of time.

Neglecting or oppressing tribal affiliations and traditions will invariably produce rejection and resistance from the very social networks that make up the fundamental social structure of Libya, and as at the present, the majority of tribes, as well as a majority of the Libyan population does not embrace the TNC. The only persons in position to change this would be the leading representatives of the tribes, who very likely have no wish to undermine the very social structure on which they depend.

For more detailed data about tribes in Libya, visit i.e. the Temehu website.

Christof Lehmann is the founder and senior editor of nsnbc. Christof Lehmann is a political writer, psychologist, and independent political consultant on a wide range of issues, including conflict and conflict resolution, negotiations, security management, crisis management. His articles are published widely in international print and online media and he is a frequent contributor to radio and TV programs. He is a lifelong advocate for human rights, peace and international justice and the prosecution of war crimes - also those committed by privileged nation. In September 2011 Christof Lehmann started the blog nsnbc in response to what he perceived as an embargo on truth about the conflict in Libya and Syria. In 2013, he plans to transform nsnbc into an independent, daily, international online newspaper.
View all posts by christoflehmann →
This entry was posted in Africa, News, Opinion and tagged 20 month, al Gamaty, Bengazi, christof lehmann, contracts, Democracy, Ghadafi, Guma, Libya, nsnbc, social structure, TNC, Traditional National Counsil, transitional counsil, Tribe, Tribes, Tripoli, UK. Bookmark the permalink.