Posted on February 9, 2013 by christoflehmann

Christof Lehmann (nsnbc) – The situation in Tunisia, after the assassination of opposition leader Belaid, is rapidly deteriorating, as pro-government and pro-opposition protesters, as well as police clash in the streets. Radical Islamist clerics, with ties to Al-Qaeda, supporting the government, have issued a fatwa, calling for the murder of members of the opposition and pro-opposition protesters. The Lee Harvey Oswald like lone gunman narrative about the assassination of the 48 year old opposition leader is rejected by Tunisians. 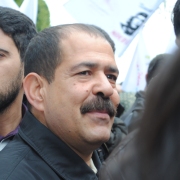 The official Tunisian narrative about the Belaid assassination, according to which Belaid was shot dead by a lone, hooded gunman, is enraging Tunisians as much, as the tale about Lee Harvey Oswald as the lone gunman in the Dallas schoolbooks repository, and the only person who stood behind the assassination of US-President John F. Kennedy, should have enraged Americans. While the opposition blames the Al-Nahda party for the assassination, the party vehemently denies any involvement.

Yesterday, Friday 8 February, thousands of protesters took to the streets after Belaid´s funeral. It came to heated battles with the police. Tear gas, Molotov cocktails, stones and batons have been used. 132 protesters have been arrested, many were injured. At times overwhelmed by the veracity of the protests, police officers began using ever more heavy-handed tactics and began abusing arrested protesters. 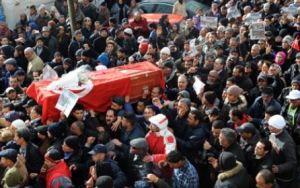 The eight year old daughter of the murdered, 48 old opposition leader, fainted during chaotic and emotional scenes at the start of the almost four kilometer long funeral procession. Belaid´s father Salah Belaid said, that his son was a man who lived with courage and dignity, that he was not afraid, and that his son had died as a martyr for Tunisia. According to AFP, the former premier and now center-right opposition leader Beji Caid Essebsi said, that the opposition had lost a great hero.

Members of the main, ruling Islamist party have called for a rally in the capital Tunis today, Saturday 9 February at the Habib Bourguiba Avenue, where protests two years ago, in January 2011, led to the downfall of former President Zine al-Abidine Ben Ali. The counter-demonstration was organized under the slogan of defending the legitimacy of the constituent assembly, where the al-Nahda party dominated coalition holds the majority.

The Al-Nahda party denounced foreign, and particularly French interference after the comments of French Foreign Minister,  earlier this week, had described the murder on Belaid an attack on the values of the Tunisian Jasmine Revolution. Some members of the opposition however, have voiced suspicions, that France or the USA in fact may have been involved in the assassination to secure the results of the “Flower Revolution”.

The coalition of governing parties and the administration of Prime Minister Hamadi Jebali are deeply split with regard to Jebali´s planned reshuffle of the government and the forming of an all-inclusive, great coalition of technocrats.

While P.M. Hamadi Jebali late Friday stated, ” I stand by my decision to form a government of technocrats and I would not need the support of the constituent assembly”, other, high-ranking members of his and other ruling parties vehemently denounced the decision.

While the opposition is being supported by Tunisia´s General Union of Tunisian Workers (UGTT), which has more than 500,000 members, the al-Nahda party is predominantly supported by many Tunisian clerics, including radical Wahabi – Salafi clerics with ties to Al-Qaeda associated organizations.

With radical Islamist organizations present, weapons easily accessible from Libya, with Salafist clerics issuing a fatwa that legitimizes the murder of opponents to the ruling party and the government, Tunisia may very well spiral into a situation close to a civil war. Among the many uncertainties about Tunisia is the question, whether, and if yes then how the second wave of the “Arab Spring”  in Tunisia could be understood within a wider Northern and Central-African context.

While the re-colonization of Africa by Europe and the USA is running on overdrive, and while Tunisians are facing many uncertainties, there is something that is absolutely certain.

The  story that Belaid has been assassinated by a lone, hooded gunman, who acted on his own volition, is no more likely true than the official story about Lee Harvey Oswald having been the lone assassin of US President John F. Kennedy.

There is something that speaks for the Tunisian people; which is, that probably more than 50 % of them belong to the crazed crowd on the Grassy Knoll, who shout “conspiracy”. One would hope that the US citizenry learned from the Tunisians. If they did, then the world might be spared from more Arab Springs and Flower Revolutions.

Mursi´s Choice: Inclusiveness and Compromise, or Intolerance and Catastrophe.

Christof Lehmann is the founder and senior editor of nsnbc. Christof Lehmann is a political writer, psychologist, and independent political consultant on a wide range of issues, including conflict and conflict resolution, negotiations, security management, crisis management. His articles are published widely in international print and online media and he is a frequent contributor to radio and TV programs. He is a lifelong advocate for human rights, peace and international justice and the prosecution of war crimes - also those committed by privileged nation. In September 2011 Christof Lehmann started the blog nsnbc in response to what he perceived as an embargo on truth about the conflict in Libya and Syria. In 2013, he plans to transform nsnbc into an independent, daily, international online newspaper.
View all posts by christoflehmann →
This entry was posted in Middle East, News and tagged Belaid funeral ends in mass protests, christof lehmann, nsnbc Middle East News, Tunisis descending into chaos, Tunisis´s Lee Harvey Oswald story, Tunisisn cleriks call for murder of opposition protesters. Bookmark the permalink.
Loading Comments...
%d bloggers like this: