Posted on January 30, 2013 by christoflehmann 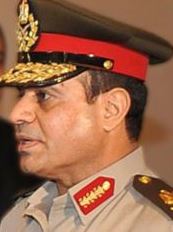 The mass protests in Egypts major cities continue in spite of emergency laws, curfews and crackdowns. The Egyptian opposition parties have turned down President Mursi´s invitation to national dialog. The opposition rejection did not surprise after a leading member of the Freedom and Justice Party called the oppositions demands to include discussions about amendments to the constitution ” a waste of time” and a rejection of Mursi´s invitation on the grounds that Mursi refused to discuss the constitution “unrealistic”. Egyptian military forces have deployed to protect vital interests in the Suez Canal cities of Port Said and Suez. Egypts Chief of Staff and Defense Minister Abdel-Fattah el-Sissi warned that Egypt could collapse.

Rather than making progress in resolving the crisis, the attitude of the Freedom and Justice Party and President Mursi, which is by many perceived as arrogant, condescending and an omen for a descend into fascism unless the President resigns and calls for early elections, the country continues to descend into further chaos.

Riots and clashes have so far cost more than 60 lives, nearly a thousand are reported injured, many of them severely. Mursi´s responses to the public outrage, his cracking down on the protests with tear gas, batons and his issuing of a decree that slammed a 30 days state of emergency on the already angered masses while he is refusing to discuss core issues were bound to enrage protesters even more.

“The continuation of the conflict between the different political forces and their differences over how the country should be run could lead to the collapse of the state and threaten future generations”.

With all respect, but if President Mursi had not endangered the freedom and civil liberties of future generations and sold the already impoverished to the IMF, would it ever have been necessary to issue “that” warning ?

El-Sissi became commander-in-chief in August 2012 and is known for criticizing the Administration of Hosni Mubarak for the violent crackdown on protesters two years ago.

So far the military has, in spite of 60 dead and almost a thousand injured, been acting with relative restraint and let the police and other security services do the wet and dirty work. However, with the protests not seeming to ebb off, with masses protesting in spite of the military´s presence in the streets, el-Sissi´s fears of an outright rebellion could soon become his living nightmare. In that case he will have to make a decision which could not only save Egypt from further bloodshed, but which could make the difference between, whether he will be keeping Mohammed Mursi and Hosni Mubarak in company for the next many years or not.

Until today he has played his cards well and he could, if the rage continues to rock the foundations of Egypt, become the man who has to, or will want to make the decision to say “enough already”. It could be the second wise career move. Regardless whether his loyalties are with the Muslim Brotherhood and the AKP, with the Military or with the People of Egypt, he is bound to know that the military in Egypt to a very high degree “is” the people.

He will know that the very convenient and unexpected death of the former Egyptian Spy Chief, the director of Egypt’s mighty Military Intelligence Service Omar Suleiman in an US American Hospital, may have helped covering up that the Muslim Brothers have acted in collusion with Qatar to prepare “THE ARAB SPRING” and the rise of the Muslim Brothers in Egypt since 2007; It might even have helped covering up his own involvement, if he ever was involved.

He must be aware of that many of the top military brass have been demoted or decommissioned and AKP loyal officers have filled the ranks; he is however, also bound to know that he will be facing an almost impossible if not suicidal task, if he was to order his sergents and lieutenants to open fire on their brothers and sisters.

If he continues playing his cards wisely he may very well be the one who will have to and want to say “enough already” deploy the military in the streets, occupy the presidential palace and parliament and call for a new constitutional council and elections. In that case, and if he can control the wrath of the Brotherhood, the big bogeyman on the other side of the Atlantic and the Qatari Petro-Dollar Sheiks, he may become the hero of 2013.

If he plays his cards unwisely, he will one way or the other end up with keeping Mubarak in Company. The question whether Mursi would share a cell with Mubarak and el-Sissi depends entirely on two and two factors only.

The first is whether el-Sissi waits until Mursi has enough of blood on his hands while he is keeping his own hands clean.

The other is, whether the prison guard is sadistic enough to lock all three of them up together.

If it is difficult to find someone cruel enough to do it, I suggest that one should be hiring a guard from one of those prison wards where they keep the extraordinarily renditioned special guests who are being sent to Egypt by those vanguards of Freedom and Democracy who will complain about Egypt no matter what.

Mursimania: President Declares State of Emergency and Curfew, invites to Dialog but Refuses to Discuss Constitution.

Christof Lehmann is the founder and senior editor of nsnbc. Christof Lehmann is a political writer, psychologist, and independent political consultant on a wide range of issues, including conflict and conflict resolution, negotiations, security management, crisis management. His articles are published widely in international print and online media and he is a frequent contributor to radio and TV programs. He is a lifelong advocate for human rights, peace and international justice and the prosecution of war crimes - also those committed by privileged nation. In September 2011 Christof Lehmann started the blog nsnbc in response to what he perceived as an embargo on truth about the conflict in Libya and Syria. In 2013, he plans to transform nsnbc into an independent, daily, international online newspaper.
View all posts by christoflehmann →
This entry was posted in Middle East, Opinion and tagged christof lehmann, Egypt Military Chief, El-Sissi warns about Egypt Collapse, Marching Masses, Mass protests in Egypt, Mursi, nsnbc opinion. Bookmark the permalink.
Loading Comments...
%d bloggers like this: