Posted on December 21, 2012 by nsnbc international 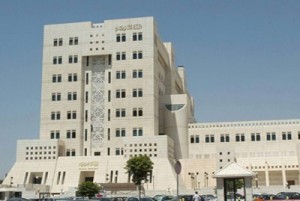 Damascus, (SANA)_Foreign and Expatriates Ministry said that ”It was not surprising for Syria that the parties known for their hostility to the Syrian government adopted overturned stances and distorted facts regarding the situation that has emerged in al-Yarmouk Camp over the last few days, due to the attack that the Jabhat al-Nusra mounted, backed by other terrorist groups.”

In two identical letters addressed to the head of the UN Security Council and the UN Secretary-General on Thursday, the Ministry said that these parties have wrongly held the Syrian government responsible for the situation in the Camp, with the backing of biased media that has misled the public opinion.”

The Ministry expressed condemnation to all who allowed themselves to point an accusing finger at Syria, adding that Syria holds them responsible for the catastrophe that the armed terrorist groups caused in al-Yarmouk refugee camp, as it stresses that it has committed, since the Nakba of the Palestinian people, to receiving the Palestinian refugees and treated them as its own people, granting them all the prerogatives that the Syrian citizens enjoy.

The letters added that ”Syria has also been positive with the United Nations Relief and Works Agency (UNRWA), imposing no restrictions whatsoever on its activities, as attested by UNRWA officials inside and outside Syria.”

”Sadly, the accusations about the situation in al-Yarmouk Camp are leveled at the wrong side, instead of punishing and condemning the terrorist groups that has been threatening the Palestinians’ security and stability, not to mention killing many,” the letters said, citing Jabhat al-Nusra latest attack on al-Yarmouk camp using mortar and machineguns, which led to displacing thousands of Palestinians and the destruction of a hospital and a mosque inside the camp.

The letters said that the Syrian Arab army refrained from entering the camp, despite the locals’ pleas after hundreds of terrorist members entered the camp to preserve the Palestinians’ blood and property.

“Syria has maintained contacts with the Palestinian official and non-official political figures and movements for not involving the Palestinian people in the Syrian events, and to keep them away from the terrorists who have worked to implicate them since the outset of events,” the letters said.

”Syria has reiterated the principle of not involving the Palestinians in the events in Syria during the latest visit of the UNRWA’s Commissioner-General and has offered, in cooperation with all Palestinian and international bodies, all kinds of aid and facilitations to ease the suffering of the Palestinian refugees due to Jabhat al-Nusra and its allies from the so-called ‘Free Army” occupation of al-Yarmouk Camp.”

The letters said that “Syria calls upon the UN and its Secretary-General to urge the countries who have been backing terrorist groups and prodded them to occupy al-Yarmouk Camp, for well-known goals, to pressure them to leave the camp immediately to save the lives of the Palestinian refugees, and to put a stop to the killing and destruction that these groups leave behind, instead of adopting cheap propaganda at the expense of the Palestinian blood, because the it was the terrorists who attacked the camp, and they are utterly responsible for this crime.”

nsnbc international is a daily, international online newspaper, established on 25 February 2013. nsnbc international is independent from corporate, state or foundation funding and independent with regards to political parties. nsnbc international is free to read and free to subscribe to, because the need for daily news, analysis and opinion, and the need for independent media is universal. The decision to make nsnbc international freely available was made so all, also those in countries with the lowest incomes, and those inflicted by poverty can access our daily newspaper. To keep it this way, however, we depend on your donation if you are in a position to donate a modest amount whenever you can or on a regular basis. Besides articles from nsnbc's regular contributors and staff writers, including nsnbc editor and founder Christof Lehmann, it features selected articles from other contributors through cooperation with media partners such as Global Research, The 4th Media, AltThaiNews Network and others.
View all posts by nsnbc international →
This entry was posted in Middle East, News and tagged attack on Yarmouk, Middle East, nsnbc, nusra, Palestinian Refugees, Palestinian Refugees in Syria, Politics, SANA, state sponsored terrorism, syria holds foreign governments accountable for violence, Syria holds state sponsors of terrorism accountable, Syrian Foreign and Expatriates Ministry, Yarmouk refugee camp. Bookmark the permalink.
Loading Comments...
%d bloggers like this: