Posted on November 10, 2012 by nsnbc international 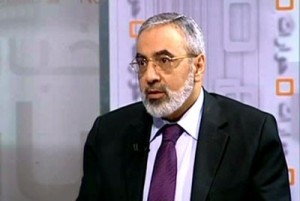 (Syriaonline, nsnbc) – Syria´s Minister of Information, Omran al-Zoubi stressed that the current meeting of opposition figures and groups abroad in Doha in the presence of Arab and foreign ministers constitutes a new form of foreign intervention which aimed at remarketing an old product, the Istanbul council, in a new international, regional and popular way.

In an interview with the Syrian TV broadcast on Friday, al-Zoubi said that the initiatives proposed during the meeting were set up by the US Studies Center and attributed to certain figures to claim that Syrian people have formulated them.

He added that there are various opposition parties in Syria which is normal but resorting to foreign sides and holding meetings under their sponsorship, funds and agendas is shameful and humiliating.

Al-Zoubi stressed that the leadership in Syria and President Bashar al-Assad believe in dialogue which should be held between influential and organized parties with political programs and visions, not between the opposition and the government.

He indicated that attempts to re-unite the opposition parties aboard are ones of bringing them together to the minimum limit that is related to slogans and organization, not on the political project which may put the agendas of their sponsors in an embarrassing situation due to their differences in a lot of issues.

“The terrorist groups in Syria will fail since there is no real incubator environment and the majority of the Syrian people are not extremists in their thinking or behavior,” the Minister said.

He added that the inability of small incubator environments to protect terrorists will lead them to move to other places such as Lebanon, Jordan, Turkey or Iraq after which they may head to Europe and spread chaos and terrorism.

Minister al-Zoubi said that the time period between issuing Geneva statement and today witnessed no achievement of political goals rather it was full of massacres, more bloodshed and destruction by the armed terrorist groups which oblige countries who signed Geneva statement but did not commit to it to change their thinking as the political logic and circumstances indicated their incapability of launching military aggression because of the Syrians’ steadfastness and their rallying around their country and army.

The only option that may succeed in Syria is to sit down around national dialogue table, said Minister al-Zoubi, adding that “When the opposition is convinced that dialogue is the only solution and respond to the decision of the leadership in Syria in dialogue, we will not retreat,” said al-Zoubi.

He indicated that any consistent decision by any international reference should oblige Turkey, Qatar and other countries to stop exporting terrorism to Syria or funding it.

Al-Zoubl said that the role of the UN envoy to Syria, Lakhdar Brahimi, is mainly related to achieve the UN six-point plan and halt violence through stopping the smuggling and arming of terrorists which means that Brahimi has no work with Syria, but rather with foreign sides which support terrorism.

He added that the national public and private media continues their national duty despite all attempts to silence them, adding that the Syrian channels broadcast on the internet and that there are around 22 friendly channels which broadcast news and facts on events in Syria in cooperation with the Syrian Ministry of Information and the General Organization of Radio and TV.

Do You want to help breaking the Embargo on Truth

nsnbc international is a daily, international online newspaper, established on 25 February 2013. nsnbc international is independent from corporate, state or foundation funding and independent with regards to political parties. nsnbc international is free to read and free to subscribe to, because the need for daily news, analysis and opinion, and the need for independent media is universal. The decision to make nsnbc international freely available was made so all, also those in countries with the lowest incomes, and those inflicted by poverty can access our daily newspaper. To keep it this way, however, we depend on your donation if you are in a position to donate a modest amount whenever you can or on a regular basis. Besides articles from nsnbc's regular contributors and staff writers, including nsnbc editor and founder Christof Lehmann, it features selected articles from other contributors through cooperation with media partners such as Global Research, The 4th Media, AltThaiNews Network and others.
View all posts by nsnbc international →
This entry was posted in Middle East, News and tagged Al-Zoubi, Bashar al Assad, conflict, Doha, Doha Meeting a continuation of Foreign Intervention, Middle East, nsnbc, Security, state sponsored terrorism, Syria, Syriaonline. Bookmark the permalink.

1 Response to Syria´s Minister of Information Al-Zoubi: Opposition Meeting in Doha Is New Form of Foreign Intervention in Syria