Tame PLO Heading for New Humiliation at U.N. In November.

Posted on November 1, 2012 by christoflehmann

Tame PLO Heading for New Humiliation at U.N. In November.

The Executive Committee of the Palestinian Liberation Organization (PLO) has held a meeting under the leadership of the President of the Palestinian Authority (PA), Mahmoud Abbas, in preparation of an attempt to resuscitate the peace process at the United Nations later in November. The PLO Executive Committee also discussed the submission of a renewed application for the U.N.´s recognition of Palestine and the dynamics of the PLO´s ongoing negotiations with other, especially Arab countries.

Regional and global geo-politic developments related to the discovery of natural gas in the Persian Gulf and the Levanthine Basin in the eastern Mediterranean in 2007 are posing a serious threat to the existence of Palestine, thus lending additional urgency to the PLO´s initiative. In a recent article the renown political analyst F. William Engdahl details the lack of convergence between the energy and security requirements of respectively Qatar, Israel, Egypt, Turkey and the European Union on one side, and those of Iran, Iraq, Syria, Lebanon, Palestine and Russia on the other. 1)

The onset of the so-called Arab Spring with the agency of the Muslim Brotherhood, the realignment of Hamas in Palestine and Al Jamaa al-Islamiya with Qatar and the international Muslim Brotherhood since 2008, a fact which only transpired in 2011, are direct consequences of the discovery of these gas resources and the subsequent implementation of what is widely described as the Greater Middle East Project.

These plans include among other, the permanent annexation of the Israeli occupied Syrian Golan, parts of southern Lebanon,  the greater part of the Palestinian West Bank and East Jerusalem by Israel, and the establishment of a Hamas -led Palestinian state in the Gaza Strib.

It is within this context that the urgency of the PLO´s initiative can be recognized. The PLO Executive Committee is therefore also experiencing increased pressure from both progressive Palestinian factions and popular demands to abandon the Oslo Accords, which effectively have resulted in the entrapment of the PLO in a so-called peace process, while Israel systematically established political and infrastructure related realities which have made a two-state solution virtually impossible.

The PLO Executive Committee stated that all parties must perform their duties with respect to this campaign as the peace process is running in circles without any progress due to Israel´s ongoing violations, adding that the observer status at the U.N. is a legitimate right that is guaranteed by international laws and resolutions of the UN Security Council.

The Executive Committee (EC) referred to the legitimacy of the nonviolent and peaceful resistance against Israel´s illegal occupation and that this struggle will continue until liberation and independence. The EC also referred to the strict financial sanctions which are being imposed on the Palestinian Authority by the United States and Israel, calling them unilateral, and that the sanctions are costing the Palestinian economy more than 5.6 Billion US Dollar per year.

It would be advisable for the PLO to recognize that a PLO without a military credibility is a PLO that facilitates the dismantling of any realistic chance to negotiate with Israel. It would also be appropriate for the progressive Palestinian factions and the PLO to recognize that neither Qatar, Saudi Arabia, Jordan or Egypt are appropriate partners in the struggle for the liberation of Palestine.

The realpolitik, the actuality with regard to Palestine is that neither Palestine nor the PLO will survive unless Syria and Lebanon remain sovereign. Unless the PLO returns to negotiations on the basis of military credibility neither the PLO nor Palestine will have a real future other than one in which Palestine exists in the form of isolated micro enclaves in the West Bank and an officially recognized Palestinian Caliphate Gaza under the leadership of Hamas. 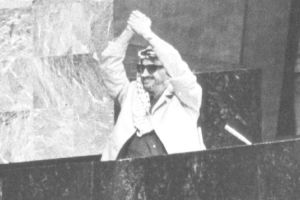 Historical precedence has shown that a PLO which is represented at the United Nations by a PLO Secretary General who is carrying his sidearm is eliciting more readiness from Israel, the USA and Europe to negotiate than a PLO mission at the United Nations which protests with a symbolic blue chair in their hands. Israel will never give up one square inch of land without taking two unless it is facing other than words and sporadic protest at a dysfunctional United Nations.

Corporate media depend on corporate money.

I depend on nsnbc to write independently.

nsnbc depends on Your Donation.

Christof Lehmann is the founder and senior editor of nsnbc. Christof Lehmann is a political writer, psychologist, and independent political consultant on a wide range of issues, including conflict and conflict resolution, negotiations, security management, crisis management. His articles are published widely in international print and online media and he is a frequent contributor to radio and TV programs. He is a lifelong advocate for human rights, peace and international justice and the prosecution of war crimes - also those committed by privileged nation. In September 2011 Christof Lehmann started the blog nsnbc in response to what he perceived as an embargo on truth about the conflict in Libya and Syria. In 2013, he plans to transform nsnbc into an independent, daily, international online newspaper.
View all posts by christoflehmann →
This entry was posted in Middle East, Opinion, Politics and tagged Arafat with side arm, Armed Resistance, christof lehmann, Gaza, Greater Middle East Project, Liberation of Palestine, Mahmud Abbas, Middle East, Middle East natural Gas threatens Palestine, Muslim Brotherhood, nsnbc, Observer Status for Palestine at UN, palestinian liberation organization, Palestinian UN MIssion´s Symbolic Blue Chair, PLO, PLO Executive Committee, Politics, United Nations, war on syria. Bookmark the permalink.

4 Responses to Tame PLO Heading for New Humiliation at U.N. In November.