Posted on October 7, 2012 by christoflehmann

The decision of Turkey´s  AKP government to allow Turkish military operations beyond the Turkish-Syrian border has been met with massive popular protests. The population of Turkey and Turkey´s opposition is slowly gaining momentum at opposing what is perceived as a US attempt to use Turkey as a pawn in a war on Syria and Iran. The ultimate US goal for Turkey has since 1996, when the RAND Corporation designed the so-called Greater Middle East Project, been the division of the country along ethnic nationalist lines. The Turkish Parliament´s decision to allow cross border military operations is not only a violation of the Turkish constitution and international law, it is an act of treason against Turkey´s national security and national integrity.

Even though the Syrian government has expressed its condolences to the families and loved ones of those who died in the recent cross border mortar attack which killed several Turkish civilians, and even though Syria has expressed its regrets about the unintended firing of mortar rounds into Turkish territory, there are a number of factors which must be taken into account before it is possible to establish the legitimacy of Turkey´s claim to self-defense or the invocation of article five of the NATO alliance.

Evidence has transpired that the Erdogan led AKP government has provided the same kind of mortars as those that were used in the shelling of the Turkish village Akcakale.

Even though the Syrian government expressed its condolences and regrets, it has not been positively established that the mortars have been fired by regular Syrian military forces. A journalist who has been in the region and who for good reasons remains anonymous has stated to the author that the Syrian military was “not far from the location” from where the mortar was fired, but that the Syrian military was in the area in pursuit of the Free Syrian Army (FSA) troops who fired the mortar into Turkey. The journalist’s statement casts doubt about the legitimacy about Turkey´s claim of having been attacked by Syria and suggests the possibility of a false flag attack, carried out by the FSA, with, or without the involvement or the knowledge of either the AKP government or Turkish military command.

The AKP government´s, and in particular Prime Minister R. Tayyip Erdogan´s involvement in actively preparing the “Arab Spring” since 2010 has been well documented in previous articles by the author.

An investigation by PRESS TV and Al-Alam journalist Maya Naser, in cooperation with the author, leading members of the Workers´ Party (Turkey) and International Lawyer Christopher Black focused on Turkey´s possible forces use of prisoners to fight in the Syrian insurgency.  Maya Naser was assassinated by a sniper when he rushed to the scene of two bomb blasts in Damascus. The preliminary investigation suggests that the snipers had been pre-positioned at least two hours before Maya Naser was shot. Maya Naser provided further evidence which indicated that Turkish insurgents in Syria usually were in command positions, while the bulk of foot soldiers were from the Gulf States, Afghanistan and Libya.

On 4. October the Deputy Chairman of the Workers´ Party (Turkey),  Hasan B. Özbey stated that the decision of the Turkish Grand National Assembly to allow Turkish cross border military operations in Syria is designed to drag Turkey into a war. Özbey reiterated that the decision was part of the United States Greater Middle East Project, developed by the RAND Corporation in 1996. Özbey further stated that the assembly has announced its complicity in a crime that will lead to treason. The Workers´ Party is calling the assembly decision illegal and inconsistent with the constitution, reiterating that the Turkish Army cannot take part in this crime, and that it is time for the nation to speak.

Even tough most western mainstream media predominantly cover the situation in Syria from a perspective that makes them vulnerable to being accused for right out pro-western propaganda, it becomes increasingly difficult for them to keep the facts about the illegal support of the insurgency and the cooperation of Turkey, GCC and NATO member states, and other governments and their cooperation with known terrorist organizations out of mainstream news and reporting. 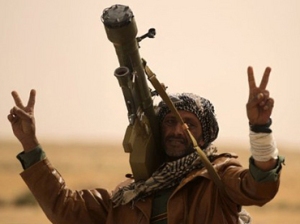 In September a journalist from the British newspaper The Guardian reported about a shipload of weapons which had arrived in Turkey from Libya. The weapons shipment included among other SAM-7 and Stinger Missiles and heavy artillery. These weapons have since been transported into Syria. The long-term security problems caused by delivering thousands of missiles into the hands of known terrorist organizations with the help of the Turkish military are incalculable but predictable.

A journalist from Labanon´s Al-Jadeed TV risked her life, filming how a Turkish military officer in Syria distributed weapons to the different insurgents, including registered terrorist organizations.

Even if the mortar shells which catalyzed the illegitimate resolution of the Turkish Parliament have been fired by regular Syrian troops it must be considered an accident, caused by Turkey´s systematic, sustained and illegal involvement into the attempted subversion of Syria.
An increasing number of mass protests in Turkey indicate that the people of Turkey, in spite of massive propaganda, are waking up to the truth about the situation and the fact that their government is playing into the hands of US strategists who plan to divide Turkey into smaller states along ethnic-nationalist lines.

Killing of Journalist Maya Naser in Damascus possibly tied to his investigation into Turkey War Crimes.

Corporate media depend on corporate money.

I depend on nsnbc to write independently.

nsnbc depends on Your Donation.