Posted on September 25, 2012 by nsnbc international

BEIJING – The Chinese government issued a white paper on Diaoyu Dao Tuesday, asserting the country’s indisputable sovereignty over it and its affiliated islands. 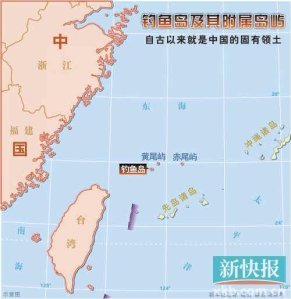 Diaoyu Dao and its affiliated islands are an inseparable part of the Chinese territory, it is China’s inherent territory in all historical, geographical and legal terms, and China enjoys indisputable sovereignty over Diaoyu Dao, the white paper says.

The white paper, titled “Diaoyu Dao, an Inherent Territory of China”, was released by the State Council Information Office of the People’s Republic of China.

For quite some time, Japan has repeatedly stirred up troubles on the issue of Diaoyu Dao. On September 10, 2012, the Japanese government announced the “purchase” of Diaoyu Dao and its affiliated Nanxiao Dao and Beixiao Dao and the implementation of the so-called “nationalization”. This is a move that grossly violates China’s territorial sovereignty and seriously tramples on historical facts and international jurisprudence, the white paper says.

China is firmly opposed to Japan’s violation of China’s sovereignty over Diaoyu Dao in whatever form and has taken resolute measures to curb any such act. China’s position on the issue of Diaoyu Dao is clear-cut and consistent, the white paper stresses.

“China’s will to defend national sovereignty and territorial integrity is firm and its resolve to uphold the outcomes of the World Anti-Fascist War will not be shaken by any force,” the white paper says.

The white paper says that Diaoyu Dao was first discovered, named and exploited by China, and it had long been under China’s jurisdiction, according to the white paper.

In the early years of the Ming Dynasty, China placed Diaoyu Dao under its coastal defense to guard against the invasion of Japanese pirates along its southeast coast. The Qing court not only incorporated the Diaoyu Dao Islands into the scope of China’s coastal defense as the Ming court did, but also clearly placed the islands under the jurisdiction of the local government of Taiwan. Chinese, Japanese and other foreign maps also show that Diaoyu Dao belongs to China.

Japan’s occupation of Diaoyu Dao during the Sino-Japanese War in 1895 is illegal and invalid. After World War II, Diaoyu Dao was returned to China in accordance with such international legal documents as the Cairo Declaration and the Potsdam Proclamation. No matter what unilateral step Japan takes over Diaoyu Dao, it will not change the fact that Diaoyu Dao belongs to China, the white paper says.

Diaoyu Dao was returned to China after the Second World War. However, the United States arbitrarily included Diaoyu Dao under its trusteeship in the 1950s and “returned” the “power of administration” over Diaoyu Dao to Japan in the 1970s, the white paper says.

“The backroom deals between the United States and Japan concerning Diaoyu Dao are acts of grave violation of China’s territorial sovereignty. They are illegal and invalid. They have not and cannot change the fact that Diaoyu Dao belongs to China,” the white paper says.

On March 8, 1972, Japan’s Ministry of Foreign Affairs issued the Basic View on the Sovereignty over the Senkaku Islands in an attempt to explain the Japanese government’s claims of sovereignty over Diaoyu Dao, which is rejected by China as “totally unfounded”.

According to the white paper, as China and Japan were normalizing relations and concluding the Sino-Japanese Treaty of Peace and Friendship in the 1970s, the then leaders of the two countries, acting in the larger interest of China-Japan relations, reached important understanding and consensus on “leaving the issue of Diaoyu Dao to be resolved later.”

“This severely infringed upon China’s sovereignty and ran counter to the understanding and consensus reached between the older generation of leaders of the two countries. It has not only seriously damaged China-Japan relations, but also rejected and challenged the outcomes of the victory of the World Anti-Fascist War,” the white paper says.

nsnbc international is a daily, international online newspaper, established on 25 February 2013. nsnbc international is independent from corporate, state or foundation funding and independent with regards to political parties. nsnbc international is free to read and free to subscribe to, because the need for daily news, analysis and opinion, and the need for independent media is universal. The decision to make nsnbc international freely available was made so all, also those in countries with the lowest incomes, and those inflicted by poverty can access our daily newspaper. To keep it this way, however, we depend on your donation if you are in a position to donate a modest amount whenever you can or on a regular basis. Besides articles from nsnbc's regular contributors and staff writers, including nsnbc editor and founder Christof Lehmann, it features selected articles from other contributors through cooperation with media partners such as Global Research, The 4th Media, AltThaiNews Network and others.
View all posts by nsnbc international →
This entry was posted in Analysis, Asia, Geo-Politics, News and tagged asia, Asia Security, China, china japan disputed territory, china japan territorial dispute, china white paper on diaoyu islands, Diaoyu Dao, diaoyu islands, east china sea, global security, international law and diaoyu islands, japan china relations, nsnbc, san fancisko treaty. Bookmark the permalink.