Hiroshima, Nagasaki and Days that will live in Infamy. Hiroshima and Nagasaki Remind The World About What Happens When Crime Prevails

Posted on August 6, 2012 by christoflehmann

Hiroshima, Nagasaki and Days that will live in Infamy.

Christof Lehmann – At the beginning at the 20th century, two world-wide military conflicts of previously unheard of brutality, suffering and destruction shook the world. The first world war became the first global conflict where Western industrialization manifested itself in the murder of human beings by mechanized methods on an industrial scale of killing and devastation. In between the two wars, mankind had acquired insight into the inner workings of the atom, was beginning to understand the fabric of matter itself. The next war documented that, as soon as mankind had acquired insight into the workings of matter itself, it had nothing better to do with the discovery than to weaponize it. After the capitulation of Germany and Italy, the second war had almost come to an end, so the race was on to use the new technology as long as it was possible to claim that there was an enemy that was worthy of using it on. In fact, victims of Hiroshima and Nagasaki from 1945 are the first victims of a technology whose victim is mankind in its entirety and humanity itself. 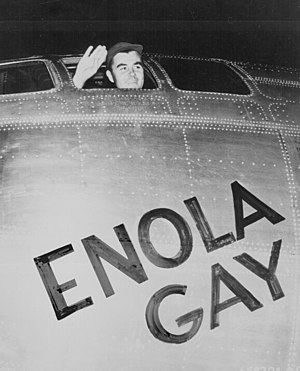 On 6 August 1945 the Japanese city of Hiroshima, it´s citizens and the entire people of Japan became the first victim of the new weapon. A plane which had lovingly been named Enola Gay hurled a bomb that lovingly had been called Big Boy, and committed the first true Holocaust, a burned offering. The second should follow only three days later when the inhabitants of the city of Nagasaki became the second set of victims of unadulterated brutality and the cynical terror-bombing of civilian populations.

It was not that terror-bombing of civilians and incineration of entire cities together with its inhabitants was unprecedented. Not long before, the German cities of Dresden and Pforzheim, which like Hiroshima and Nagasaki were largely undefended cities, were incinerated in a firestorm, killing tens of thousands.

The terror bombing of civilians, with no other military objective than to instill the sensation of fear and helplessness in entire nations populations and their governments to force the government into unconditional surrender was, as we saw on the example of Dresden, not unprecedented on 6 August 1945.

What was unprecedented was the sheer inhumanity of bringing unadulterated evil and utter and complete destruction over entire cities within seconds, while the lasting effects of this brutality, the horrendous and unspeakable suffering from radiation sickness lingered on for weeks, and while the unspeakable suffering caused by genetic damages is still lingering on today, on Monday 6 August 2012, 67 years after the most massive, outrageous and never prosecuted or punished war crimes have been committed.

In 2012 the state of Israel, that claims the first “The Holocaust” on Jews as one of many supposed justifications for over 60 years of illegal occupation of Palestinian territories, racism and apartheid is in the possession of at least 200, probably 1.000 nuclear weapons of the size of those used in Hiroshima and Nagasaki and bigger.

Nobody is imposing sanctions on Israel for not admitting international inspectors to it´s nuclear sites. “The Israeli Holocaust Industry” makes it possible. Nobody imposes any sanctions on Israel that has illegally occupied the Syrian Golan and which is currently involved in initiating, financing and aggravating an illegal war on Syria that is fought with terrorist, or should we say mercenaries and special forces.

One of the ironies of history is that Germany is delivering Dolphin class submarines to Israel and thus enables Israel to unleash a Holocaust overseas, and that France enabled Israel to develop its nuclear program, or that the Kennedy Administration was deceived when it insisted on inspections of Israels Dimona nuclear facilities and Lyndon B. Johnson turned a blind eye after Kennedy was extraordinarily rendered into the custody of a god who, if he exists, must have been deafened and blinded by Hiroshima and Nagasaki. The policy is euphemistically termed “Nuclear Ambiguity”. I wonder how the words “Nuclear Ambiguity” must have sounded for survivors of Hiroshima and Nagasaki who gave birth to children that hardly had the likeness of a human being. Where there is empathy and humanity, nuclear ambiguity is equivalent with the endorsement of unadulterated, premeditated evil.

As we see, Hiroshima and Nagasaki are today as relevant as they have ever been and there is a cohort of other pressing reasons than the above mentioned ironies.

The worlds populations did not raise in outrage against Hiroshima and Nagasaki. That given, why should warmongers fear the wrath of a population that learns the truth about NATO/Al Qaeda cooperation in Syria, Contras in Honduras, massacres in Sabra and Shatila? Where crime can be committed with virtual impunity, it will, and rendering the responsibility to those who finance, encourage and commit them may be called democracy but it is, in deed, a burden of guilt which I could not console with ethical integrity.

The worlds nuclear arsenals today are sufficiently powerful to murder each and every human being on this planet; and if one has no particular sympathies for our species, maybe the possible extinction of the Panda and most other mammals can provide an appropriate perspective.

The worlds populations are still propagandized into accepting the worst outrages against humanity. Euphemisms like “ we nuked Japan to end the war” are still dominating the public discourse and it is not accidentally so. The world needs a coordinated effort of scholars and intellectuals, workers, farmers, and any peace-loving person of integrity to bring about a much needed change in what is acceptable within the language of the political discourse. A teleological approach would be appropriate and applying it on the issue of Hiroshima and Nagasaki, it would result in an entirely different and more honest narrative than “We nuked Japan to end the war”.

What about:” The United States of America used its national air force to explode two nuclear devices over the cities of Hiroshima and Nagasaki in a premeditated act of mass homicide on civilian populations of entire and largely undefended cities, with no direct military objective, with the explicit intention to instill the emotion of terror and utter helplessness and vulnerability and the fear of death into the population of an entire nation and its government, with the intention to terrorize it into an unconditional surrender. Hiroshima and Nagasaki were two cases of the terror bombing of civilians, premeditated mass homicide, crimes against humanity, war crimes, and the most appalling and choking crime which the world has witnessed “.

We, the people, have to force our political leadership, our media and ourselves into not accepting any other approach to the language of the political discourse than that based on teleology any longer.

Large parts of the worlds populations are systematically lied to, with respects to the use and effect of depleted uranium weapons. Depleted Uranium weapons have been used in former Yugoslavia and Iran and they are being used in an ever-increasing rate. The effect of these weapons is not only immediate but long-lasting and indiscriminate.

Hundreds of thousands of children are born with unspeakable deformations. Some of those children and parents are spared for a life in misery because the child is so deformed that it does not survive more than a few hours. Other parents are until the rest of their natural lives reminded about the fact that they are victims of one of the most outrageous war crimes every time they see their child. It is an unspeakable cruelty and a test for our humanity whether we let the use of such weapons stand or not.

Millions of children grow up, knowing that their lives have been devastated, that their right to a healthy body and or mind has been taken from them by cynical political leaders who prostitute their integrity for lobbyists paid by the military industrial complex and the nuclear industry which is glad to sale their waste product at a profit so it can be spread each time an depleted uranium ammunition impacts; anywhere.

After the devastation in Hiroshima and Nagasaki, American scientists were acutely aware about the effects of radiation sickness, about the fact that victims had to be decontaminated to prevent harm to medical personnel, but the government of the United States of America withheld information that could have prevented tens of thousands of additional death from Japanese authorities and scientists.

Hiroshima and Nagasaki are as relevant today as they have ever been, because by being the worst war crimes that have been committed until this day they are representative for war crimes everywhere and anywhere at any time. Moreover, they are symbolizing the fact that war crimes are still being committed with impunity, that loving names like Enola Gay and Little Boy still have not been substituted with the words “Unadulterated Evil”. It is only the looser of a conflict that has the questionable privilege to become demonized as war criminal. Victors Justice prevails at the International Criminal Court.

Hiroshima and Nagasaki should remind us, today and ever, about what happens when victors justice and crime prevail.

My deepest sympathy, condolences and respect for the almost superhuman resilience in the light of unspeakable suffering go to the people of Japan. Your suffering is mine and the pain of the world. I hope your resilience will motivate much-needed resistance and urgently needed change.

Ulrike Meinhof on the War Crimes committed in Dresden – As Relevant as Ever.

Christof Lehmann is the founder and senior editor of nsnbc. Christof Lehmann is a political writer, psychologist, and independent political consultant on a wide range of issues, including conflict and conflict resolution, negotiations, security management, crisis management. His articles are published widely in international print and online media and he is a frequent contributor to radio and TV programs. He is a lifelong advocate for human rights, peace and international justice and the prosecution of war crimes - also those committed by privileged nation. In September 2011 Christof Lehmann started the blog nsnbc in response to what he perceived as an embargo on truth about the conflict in Libya and Syria. In 2013, he plans to transform nsnbc into an independent, daily, international online newspaper.
View all posts by christoflehmann →
This entry was posted in Asia, Opinion, Politics, World and tagged christof lehmann, depleted uranium, Dr. Christof Lehmann, Hiroshima, hiroshima nagasaki, Human Rights, indiscriminate weapons, Iraq, Japan, Middle East, military objective, nagasaki, nsnbc, nsnbc-nsnbc, Nuclear Proliferation, Nuclear Weapons, Politics, unadulterated brutality, victors justice, war crimes, Yugoslavia. Bookmark the permalink.

1 Response to Hiroshima, Nagasaki and Days that will live in Infamy. Hiroshima and Nagasaki Remind The World About What Happens When Crime Prevails