Palestine: The occupation races with time to impose a fait accompli and abolish the Palestinian existence in Jerusalem

Palestine: The occupation races with time to impose a fait accompli and abolish the Palestinian existence in Jerusalem 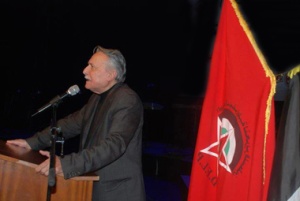 DFLP – MP Qais Abdel-karim, Abu Laila, member of the politburo of the Democratic Front for the Liberation of Palestine, has said, “The decision of the occupation authorities to build 1000 settlement units in Jabal Abu Ghoneim in occupied Jerusalem area comes in the context of a comprehensive Israeli war against our people, aiming at rooting our people out of their land and deporting them to other territories.”

“What Israel is doing is an attempt to impose a fait accompli on the ground. The Israeli extremist government has accelerated the pace of settlement all over the Palestinian territories, especially in the occupied Jerusalem in order to create new facts on the ground”, Abu Laila added. “These actions require the international community to hold responsibility and take a decisive resolution compelling Israel to stop violations in the Palestinian territories.” Abu Laila added.

Abu Laila has confirmed that the settlements built on the Palestinian territories are illegal and the attempts of the occupation to create facts on the ground by extending the settlements will never create a fact accepted by our people who adhere to establishing their independent state on the border of June 1967 with Jerusalem its capital according to the international norms and laws.

The Israeli press sources have recently revealed a series of ratified settlement charts in the West Bank and Jerusalem including the construction of 130 settlement units in Jabal Abu Ghoneim located on the south east road from Jerusalem to Bethlehem in the south of the West Bank as part of 1000 housing units to be set up and rent.

Hamas, adding lies on lies does not make a “truth”.

nsnbc international is a daily, international online newspaper, established on 25 February 2013. nsnbc international is independent from corporate, state or foundation funding and independent with regards to political parties. nsnbc international is free to read and free to subscribe to, because the need for daily news, analysis and opinion, and the need for independent media is universal. The decision to make nsnbc international freely available was made so all, also those in countries with the lowest incomes, and those inflicted by poverty can access our daily newspaper. To keep it this way, however, we depend on your donation if you are in a position to donate a modest amount whenever you can or on a regular basis. Besides articles from nsnbc's regular contributors and staff writers, including nsnbc editor and founder Christof Lehmann, it features selected articles from other contributors through cooperation with media partners such as Global Research, The 4th Media, AltThaiNews Network and others.
View all posts by nsnbc international →
This entry was posted in Middle East, Politics and tagged abdel karim, Abu laila, democratic front for the liberation of palestine, DFLP, ethnic cleansing, Illegal Construction, Illegal Settlements, Israel, Jabal Abu Ghoneim, jerusalem, Middle East, nsnbc, occupation authorities, Occupation of Palestine, Palestine, Palestinian territories, Politics, West Bank, zionism. Bookmark the permalink.

1 Response to Palestine: The occupation races with time to impose a fait accompli and abolish the Palestinian existence in Jerusalem