Death of a Proud Self Avowed Terrorist: Former P.M. Yitzhak Shamir Goes to The Great Hague in the Sky.

Posted on July 1, 2012 by nsnbc international

Death of a Proud Self Avowed Terrorist:

Former P.M. Yitzhak Shamir Goes to The Great Hague in the Sky. 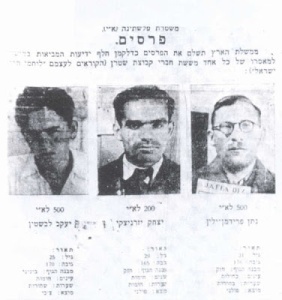 Sometimes terrible people live long lives. Such is the case with Icchak Yezernitsky, a Russian-born racist, terrorist and eager ethnic cleanser who is better known to the world as former Israeli Prime Minister Yitzhak Shamir.  Shamir died today, June 30, 2012, at a Tel Aviv nursing home from Alzheimer’s Disease at the ripe old age of 96.  One can only wonder if he had forgotten all the war crimes he had committed.

Nearly every mainstream media outlet has eulogized Shamir with encomiums, or at least profound respect.  Here are some of Shamir’s greatest hits, most of which have been omitted from most of the media’s effusive obituaries:

Shamir was one of the leaders of Lehi (also known as The Stern Gang), a Zionist terrorist militia which rampaged through Palestine in the 1940s.  Were anyone to dispute that Lehi was a terrorist group, Shamir proudly affirmed that particular description in a 1943 article he wrote entitled “Terror.”  Shamir wrote,

Neither Jewish morality nor Jewish tradition can be used to disallow terror as a means of war…We are very far from any moral hesitations when concerned with the national struggle.

First and foremost, terror is for us a part of the political war appropriate for the circumstances of today, and its task is a major one: it demonstrates in the clearest language, heard throughout the world including by our unfortunate brethren outside the gates of this country, our war against the occupier.

The Zionist terror campaign of Plan Dalet, put into effect in early 1948 and described by Israeli historian Ilan Pappe, consisted of “large-scale intimidation; laying siege to and bombarding population centres; setting fires to homes, properties, and goods; expulsion; demolition; and finally, planting mines among the rubble to prevent any of the expelled inhabitants from returning.”

Shamir seemed to relish the opportunity to terrorize, murder and ethnically cleanse Palestine of its indigenous population into order to make room for the nascent state of Israel.  The massacre of Deir Yassin in April 1948, during which over 100 unarmed villagers were murdered, was carried out by Zionist commandos of Shamir’s Lehi and Menachem Begin’s Irgun (of which Shamir was a former member).

Following Israel’s unilateral declaration of independence in May 1948, the United Nations reassessed its approach to the partition of Palestine and appointed a mediator, Swedish diplomat Folke Bernadotte, to come up with new proposal while taking into account “the aspirations of the Jews, the political difficulties and differences of opinion of the Arab leaders, the strategic interests of Great Britain, the financial commitment of the United States and the Soviet Union, the outcome of the war, and finally the authority and prestige of the United Nations.”  Notice that the rights of the indigenous Palestinians were not included in this mandate.

Nevertheless, while Bernadotte’s second proposal was produced in consultation with British and American emissaries, then-President Harry Truman undermined its progress in the UN due to pre-election Zionist influence in the United States.  When Bernadotte finally presented his progress report, “Mediation, Truce Supervision, Refugees, Proposals for Peaceful Settlement,” on September 16, 1948, it included this unequivocal statement:

It is not yet known what the policy of the Provisional Government of Israel with regard to the return of Arab refugees will be when the final terms of settlement are reached. It is, however, undeniable that no settlement can be just and complete if recognition is not accorded to the right of the Arab refugee to return to the home from which he has been dislodged by the hazards and strategy of the armed conflict between Arabs and Jews in Palestine. The majority of these refugees have come from territory which, under the Assembly resolution of 29 November, was to be included in the Jewish State. The exodus of Palestinian Arabs resulted from panic created by fighting in their communities, by rumours concerning real or alleged acts of terrorism, or expulsion. It would be an offence against the principles of elemental justice if these innocent victims of the conflict were denied the right to return to their homes while Jewish immigrants flow into Palestine, and, indeed, at least offer the threat of permanent replacement of the Arab refugees who have been rooted in the land for centuries. (A/648 1.V.6)

The very next day, September 17, 1948, Bernadotte was assassinated in West Jerusalem by members of Lehi, acting on Shamir’s explicit orders.

In 1969, Shamir formally joined Begin’s “Freedom Party” (Herut), which Jewish luminaries such as Albert Einstein and Hannah Arendt had decried years earlier as “a political party closely akin in its organization, methods, political philosophy and social appeal to the Nazi and Fascist parties” which “preached an admixture of ultranationalism, religious mysticism, and racial superiority.”

In April 1988, during the first Intifada, then-Prime Minister Yitzhak Shamir warned that any Palestinian caught protesting would have his “head smashed against the boulders and walls.” He continued, “We say to them from the heights of this mountain and from the perspective of thousands of years of history that they are like grasshoppers compared to us.”

Shamir was a committed colonialist.  Even when, in September 1991, U.S. President George H.W. Bush threatened to withhold “loan guarantees sought by Israel unless the Israeli Government, which has ignored all of his previous appeals to halt settlement-building in the occupied West Bank and Gaza Strip, freezes building activity,” Shamir never halted further colonization of Palestine.

In June 1993, after being voted out of office, Shamir stated his desire to deliberately subvert any efforts to establish a Palestinian state by carrying out peace talks under false pretenses.  “I would have conducted the autonomy negotiations for 10 years, and in the meantime we would have reached half a million [Jewish] souls in Judea and Samaria.”  Lamenting the end of his administration, Shamir said it was “painful that in the coming four years I won’t be able to increase settlements in Judea and Samaria and Gaza.”

In 2005, Israelis voted Shamir the 29th Greatest Israeli in a poll conducted by Ynet.

Despite Shamir’s history of despicable violence and willful abrogation of international law, Barack Obama’s press secretary Jay Carney released a statement on behalf of the White House at the news of Shamir’s death.

“Yitzhak Shamir dedicated his life to the State of Israel,” the statement read. “From his days working for Israel’s independence to his service as Prime Minister, he strengthened Israel’s security and advanced the partnership between the United States and Israel.”

It is unsurprising that Benjamin Netanyahu praisedhis Likud predecessor, saying, “He was a paragon of loyalty to the Land of Israel and the eternal values of the Jewish people,” adding that “Yitzhak Shamir belongs to a generation of giants, who founded the State of Israel and fought for the freedom of the Jewish people in its land.”One should remind Netanyahu of Shamir’s proud justification of terrorism or perhaps simply note the words of the mayor of Tel Aviv under British Mandate, Israel Rokach, who in 1944 accused Shamir’s Zionist militia of “lacking even a spark of humanity and Jewish conscience” after Lehi gunmen murdered three British police officers in a public shooting.

Shamir’s daughter, Gilada Diamant, claimed her father “belonged to a different generation of leaders, people with values and beliefs. I hope that we have more people like him in the future.”  Certainly anyone who values human rights, justice, sovereignty, and self-determination for the Palestinian people, the rule of law, the Geneva Conventions, and the Nuremberg Principles does not share Diamant’s hope.

Thomas Friedman once wrote that Shamir “exemplifies those Israeli leaders whose vision of tomorrow is yesterday.”  For all those whose innocent lives were obliterated or whose families suffered at the hands of Yitzhak Shamir due to his commitment to ethnosupremacism, colonialism and mass murder, any more visions of violence and bigotry that he may have had thankfully died today.

Via Wide Asleep in America

nsnbc international is a daily, international online newspaper, established on 25 February 2013. nsnbc international is independent from corporate, state or foundation funding and independent with regards to political parties. nsnbc international is free to read and free to subscribe to, because the need for daily news, analysis and opinion, and the need for independent media is universal. The decision to make nsnbc international freely available was made so all, also those in countries with the lowest incomes, and those inflicted by poverty can access our daily newspaper. To keep it this way, however, we depend on your donation if you are in a position to donate a modest amount whenever you can or on a regular basis. Besides articles from nsnbc's regular contributors and staff writers, including nsnbc editor and founder Christof Lehmann, it features selected articles from other contributors through cooperation with media partners such as Global Research, The 4th Media, AltThaiNews Network and others.
View all posts by nsnbc international →
This entry was posted in Middle East, Opinion, World and tagged Bernadotte, international terrorism, Israeli Prime Minister, Jitzhak Shamir Died, Lehi, Middle East, nsnbc, Occupation of Palestine, Palestine, prime minister of israel, Shamir, Shamir Eulogy, Shamir Necrolog, Terrorism, Terrorism in Israel, UN, undefined, yitzhak shamir, zionism. Bookmark the permalink.
Loading Comments...
%d bloggers like this: