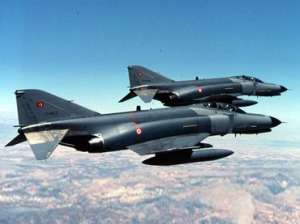 Christof Lehmann – nsnbc. Yesterday Breaking News hit the Headlines of Media World Wide. On Friday Syrian Air Defense Forces had shot down one of two Turkish F4 military planes – that had violated Syrian airspace. The response from Turkey was as expected. A threatening posture by promising “decisive action”. What Western Main Stream Media fail to report is that Turkey has backed an illegal war on Syria since 2010, implemented military operations against Syria since 2011, and that the two Turkish F4 jets flew at high speed, low altitude, and violating Syrian Air Space and International Law. Rather than that, Western Media continue constructing narratives that are meant to justify a long-planned, ruthlessly implemented war on Syria, Lebanon and Turkey.(1) The Turkish provocation of a legitimate Syrian response may be part of a plan to justify the invocation of NATO´s Article Five and all-out war.

Setting the Stage. Last week the stage was set by British P.M. David Cameron and US President Barak Hussein Obama. In condescending semantics which are emblematic for a modo-colonial warmonger, Cameron and Obama stated at the G20 meeting, that the President of the Syrian Arab Republic Bashar Al-Assad may be “granted lenience or even clemency” if he stepped down. (2) After more than one year of false media reports about the Syrian government´s and military´s massacres, like the false reports about the massacre in Al Houla,(3) this rhetoric may go down well among well propagandized Westerners. From an objective point of view ? Unleash Al Qaeda on American Citizens and murder the amount of victims of 9/11 several times over. Then, offer Obama lenience and clemency if he ceases to resist “the opposition” and steps down. How does that sound?

The seriousness of the condescending statement by the two heads of state must be understood within the context that the attempted post-modern coup d´etat in Syria is increasing in brutality, and that NATO´s Operation Unified Protector in Libya resulted in the murder of Muammar Ghadafi.The population of Denmark, which is a good example for a Western, propagandized population, has been propagandized into almost demanding the hanging of the President of Syria. The Freely distributed Danish Newspaper Weekendavisen showed Assad with his head in a noose. To his left a Star Wars ad with the lord of darkness Darth Wader, to his right a Dragon Tattoo.

Göbbels would jump from joy seeing this strike of brute and primitive genius that can even be understood by someone with the cognitive capacities of an amoeba. Assad Evil – Assad Must Hang – Assad Dragon – Assad Dark Lord – NATO Good.

Like Leni Riefenstahls Rats in Nazi War Propaganda. Nothing has changed but that Nazi has turned into NATO because they happily co-operate with Zionism and the Anglo-American Empire, and that the pictures and movies of 2012 are so much more pretty and colorful. “ist ja alles so schön bunt hier “.  (4) 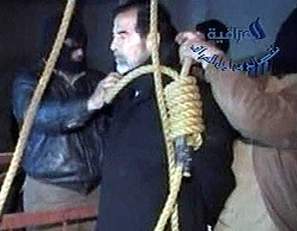 When the populous is long enough bombarded with stupidity and lies, the cold-blooded murder of heads of state becomes entertaining rather than one of the most serious crimes one possibly can commit. And Westerners are sufficiently desensitized by watching the video of the hanging of Saddam Hussein that was “accidentally” released to international TV Stations. Stage set – all that is needed is an excuse, and Fridays provocation may provide just the excuse that is needed to initiate an all-out war.

Almost in a lynch mob´s frenzy already, who in (hell) the West cares about the fact that the Turkish F4´s flew at low altitude, with high speed, violating Syrian Territory. Was it a test of Syrian Air defenses ? How will the Russian built air defenses work in combat situations. Two planes were sent on the mission,. One returned. Is someone calculating the logistics of an aerial assault ? Testing Radar Installations ? Response time ?

There is something positive to the affair. In spite of all despicable criminality of the provocation, the downing of the one, and the damaging of the other F4 has shown that Syria is full and well capable of and prepared to enforce it´s own “No Fly Zone”.

Yesterday RT reported that Syria has given an excuse to Turkey.(5)  In a later report Turkish P.M. Erdogan was quoted for telling that he had not received any excuse from Turkey. (6)

If Syria has given any excuse it would most likely have been done to defuse a critical situation. According to international law however, it would be Turkey that would have to explain why it violated Syrian Territory in a situation where it has materially, politically and militarily supported a murderous insurgency in Syria. But then, all that is entirely theoretical. When was the last time NATO has adhered to international law when it had set it´s mind on conquest and murder ? Yugoslavia ? Afghanistan ? Iraq ? Ossetia ? Libya ? Pakistani Wedding Parties kindly supplied with celebratory firecracker drones ?

The Turkish Erdogan Government is supposedly holding “emergency talks”. (7) The statement from Erdogan so far, is that Turkey is prepared to take “decisive action”. Now what is wrong with that ?

The last time I was looking in my dictionary, an emergency was a sudden and unexpected event. The Erdogan government was involved in the planning and active implementation of the war on Syria since latest 2010, when it pulled off one of the most intricate false flag attacks of the century on the Gaza Freedom Flotilla vessel Marvi Marmara. Together with allied Israel, the Muslim Brotherhood and Hamas. (8)

It is difficult to imagine that the pilots acted on their own criminal volition or that a Mad Max Officer has sent them into Syrian Airspace. So where is the unexpected and sudden part of the “emergency”. It would be much more truthful to say “P.M. Erdogan, Ministers of his Cabinet as well as members of Intelligence and Military Services had an evaluation and strategy meeting, assessing strategical issues and the possibilities for invoking article five” – but then again, when was the last time we have heard the truth about anything pertaining Syria from Erdogan?

Western main Stream Media are in a frenzy. A well planned one, and nobody is asking all the right questions:

It is not a question whether the incident will lead to a war or not. A war has been waged on Syria for more than one year. The right question would be if NATO can get away with invoking article five to justify the long-planned military intervention or if Russia and China succeed in defusing the situation for the time being so that an international meeting under participation of the USA, UK, Turkey, China, Russia, Iran, Syria and others can be held. Such a meeting however, is unlikely to yield positive results with a NATO/GCC/Israel/Al-Qaeda/Muslim Brotherhood/Hamas Alliance hell-bound on waging war.  Planning for such a meeting could in fact have the function to bide more time for the insurgency.

East-West Standoff over Syria and Iran: Explosive Diplomacy and Brinkmanship at the Brink of World War III.

1)East-West Standoff over Syria and Iran: Explosive Diplomacy and Brinkmanship at the Brink of World War III. https://nsnbc.wordpress.com/2012/06/15/east-west-standoff-over-syria-and-iran-explosive-diplomacy-and-brinkmanship-at-the-brink-of-world-war-iii/

2)Assad may be offered clemency by Britain and US if he joins peace talks. http://www.guardian.co.uk/world/2012/jun/21/assad-clemency-syria-peace-talks

3) “Humanitarian War Criminals” in High Office: Was the Houla Massacre Ordered by the Western Military Alliance?https://nsnbc.wordpress.com/2012/06/11/humanitarian-war-criminals-in-high-office-was-the-houla-massacre-ordered-by-the-western-military-alliance/

4) everything here is so pretty and colorful.

8) Was the Gaza Flotilla Massacre a Turkish-Israeli False Flag and Precursor to the War on Syria? https://nsnbc.wordpress.com/2012/02/04/was-the-gaza-flotilla-massacre-a-turkish-israeli-false-flag-and-precursor-to-the-war-on-syria/

nsnbc international is a daily, international online newspaper, established on 25 February 2013. nsnbc international is independent from corporate, state or foundation funding and independent with regards to political parties. nsnbc international is free to read and free to subscribe to, because the need for daily news, analysis and opinion, and the need for independent media is universal. The decision to make nsnbc international freely available was made so all, also those in countries with the lowest incomes, and those inflicted by poverty can access our daily newspaper. To keep it this way, however, we depend on your donation if you are in a position to donate a modest amount whenever you can or on a regular basis. Besides articles from nsnbc's regular contributors and staff writers, including nsnbc editor and founder Christof Lehmann, it features selected articles from other contributors through cooperation with media partners such as Global Research, The 4th Media, AltThaiNews Network and others.
View all posts by nsnbc international →
This entry was posted in Middle East, Opinion and tagged Article five, Bashar al Assad, China, christof lehmann, coup d etat, Dr. Christof Lehmann, Erdogan, global security, Iran, Middle East, Military Provocation, NATO, nato article five, nsnbc, Politics, propaganda, Russia, Syria, Syrian Air Defense, Turkey, war on syria. Bookmark the permalink.