Posted on May 1, 2012 by nsnbc international 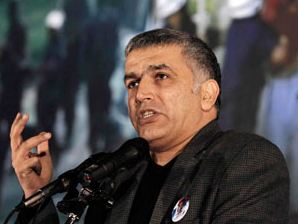 DUBAI — Prominent Bahraini rights activist Nabeel Rajab told a court on Wednesday that a charge that he tweeted insults against the government was “vindictive,” as dozens of lawyers turned up to defend him.

“The charge against me is vindictive and is due to my rights activism,” Rajab told a judge at Manama’s Minor Criminal Court, insisting the decision to arrest and try him was political, according to witnesses.

“I only practiced my right to free expression. I did not commit a crime. The decision to arrest me and put me on trial was a political decision,” he said.

More than 50 lawyers, both men and women, gathered at the court to defend Rajab, who has been leading protests following a brutal crackdown on Shiite-led demonstrations against the Sunni Al-Khalifa dynasty in March 2011.

The judge adjourned the trial to Sunday, and ordered Rajab to stay behind bars.

Rajab, who heads the Bahrain Centre for Human Rights (BCHR), was detained on May 5 for “insulting a statutory body via Twitter”. He also faces a trial for taking part in a Manama demonstration three months ago.

The activist has insisted on demonstrating inside Manama, unlike the main Shiite opposition which now stages its protests in Shiite villages, after last year’s clampdown on protesters who occupied the capital’s Pearl Square for a month.
Human Rights Watch on Tuesday urged Bahraini authorities to drop charges against Rajab.

“The charges against Nabeel Rajab are nothing more than attempts to silence one of the Bahraini government’s most prominent critics,” said Joe Stork, deputy Middle East director at the New York-based watchdog.

“Authorities should immediately drop these charges and release him,” he said in a statement.

Despite being a veteran critic of authorities in the Gulf kingdom, Rajab has been spared imprisonment in the wide wave of arrests that targeted activists after security forces quelled the Arab Spring-inspired uprising, possibly for his international exposure and links with rights groups.

Another activist, Abdulhadi al-Khawaja, who is the former head of the BCHR, has been on a hunger strike in prison since February 8. He faces a life sentence among other leading opposition activists.

The Case of The Missing Interview with Nabeel Rajab, Head of the Bahrain Center for Human Rights.

nsnbc international is a daily, international online newspaper, established on 25 February 2013. nsnbc international is independent from corporate, state or foundation funding and independent with regards to political parties. nsnbc international is free to read and free to subscribe to, because the need for daily news, analysis and opinion, and the need for independent media is universal. The decision to make nsnbc international freely available was made so all, also those in countries with the lowest incomes, and those inflicted by poverty can access our daily newspaper. To keep it this way, however, we depend on your donation if you are in a position to donate a modest amount whenever you can or on a regular basis. Besides articles from nsnbc's regular contributors and staff writers, including nsnbc editor and founder Christof Lehmann, it features selected articles from other contributors through cooperation with media partners such as Global Research, The 4th Media, AltThaiNews Network and others.
View all posts by nsnbc international →
This entry was posted in Middle East, News and tagged Arab Spring, Bahrain, Bahrain Center for Human Rights, BCHR, Civil Liberties, Human Rights, Middle East, Nabeel Rajab, nsnbc, Politics. Bookmark the permalink.