Posted on March 8, 2012 by christoflehmann

By Christof Lehmann – On Wednesday the Executive Committee of the PLO announced that the President of the Palestinian Authority, Mahmoud Abbas, had agreed to head the coming interim Palestinian government until elections have been held and a new government has been elected and is taking office. The choice of Abbas has previously been criticized by several of the PLO`s member organizations, including PFLP and DFLP, as being unconstitutional and a dangerous centralization of power. Hamas has agreed to the choice of Abbas for the interim Prime Minister post. It is not unlikely that Hamas is calculating on the political advantage during the coming elections, where it can scapegoat Fatah for it`s failures in both offices.

How far the coming elections can be proclaimed as valid and constitutional is an issue that will have to be debated too. With PFLP leader Ahmad Sa-adat imprisoned with the help of the Fatah led P.A., guarded by Israeli and US military; with much of the political leadership of the DFLP forced into exile; with other organizations as As Saika held out of influence by positioning and scapegoating them as “terrorists and Syrian agents”; and with Hamas having gained the undeclared but tangible support of Israel, Turkey, NATO, and the GCC after it`s U-Turn away from Iran and Syria, Palestinians choice at the ballot box is most likely to be that of the proverbial choice between the plague and cholera. 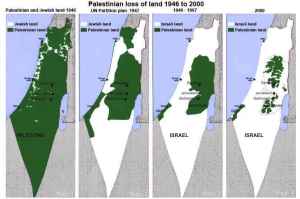 Both a vote for Fatah and a vote for Hamas will guaranty a continuation of endless and fruitless negotiations about the details of the two state solution. Hamas has recently publicly discussed the feasibility of the continuation of negotiations with Israel, and mentioned that armed struggle may be a more appropriate method to secure Palestine`s legitimate rights. The fact, however, that Hamas has turned it`s back on the only two nations who would have been able to back eventual military operations and armed resistance, namely Syria and Iran, is strongly indicative of the waring words of Hamas being pre election polemic for public consumption rather than a seriously considered strategy.With a Hamas that has aligned itself with the international wing of the Muslim Brotherhood, Qatar, the GCC, and via them with NATO and Zionism, it is utterly unlikely that Hamas has a strategic partner for any political or military anti Israeli hard line. In other words, Palestinians will have two parties to choose from, Fatah and Hamas. In either case the result will be a continuation of the two state line that guaranties the continuation of the Zionist genocide on Palestinians.

After decades of Israeli settlement buildings, the establishment of the apartheid wall, the changing of demographics and the concentration of Palestinians in isolated micro enclaves such as Qalkila, a functioning Palestinian State has become utterly illusory within the two state paradigm. That is, unless one would consider a state of affairs with de facto second class citizens inside Israel, with Palestinian passports, virtually no civil liberties and rights, with every detail and aspects from birth via the bedroom to the grave controlled by Israel, locked into isolated enclaves. In the final analysis this is the state of affairs both Hamas and Fatah would consider to be a Palestinian State.

An election without the possibility of all organizations and candidates to participate on equal terms; elections without the prior release of prisoners like Ahmad Sa-adat; elections without guaranties for the safety of other leaders, such as Ahmed Jibril who is in exile in Syria, of DFLP members who are in exile in Cuba; an election without the fair distribution of funds, of media coverage, will be an election which regardless the result, will be a dictate by Zionism and it`s allies. Moreover, it will be an election that guaranties a Palestinian government, that will maintain the function of “Administrator of the Zionist genocide on Palestinians”.

Hamas, and the Architecture of Treason on Syria, Iran and Palestine. https://nsnbc.wordpress.com/2012/02/06/hamas-the-architecture-of-treason-on-syria-iran-and-palestine/

Christof Lehmann is the founder and senior editor of nsnbc. Christof Lehmann is a political writer, psychologist, and independent political consultant on a wide range of issues, including conflict and conflict resolution, negotiations, security management, crisis management. His articles are published widely in international print and online media and he is a frequent contributor to radio and TV programs. He is a lifelong advocate for human rights, peace and international justice and the prosecution of war crimes - also those committed by privileged nation. In September 2011 Christof Lehmann started the blog nsnbc in response to what he perceived as an embargo on truth about the conflict in Libya and Syria. In 2013, he plans to transform nsnbc into an independent, daily, international online newspaper.
View all posts by christoflehmann →
This entry was posted in Middle East, Politics and tagged Apartheid Wall, As Saika, christof lehmann, DFLP, Dr. Christof Lehmann, genocide, global security, Hamas, interim prime minister, Israel, jibril, Mahmoud Abbas, Middle East, nsnbc, nsnbc-nsnbc, Occupation of Palestine, PA, Palestine, Palestinian Authority, Palestinian Elections, PFLP, PFLP-GC, Politics, Qalkila, Sa-adat, war crimes, West Bank, zionism. Bookmark the permalink.
%d bloggers like this: