Syria: A Zionist Shoe in the Face of the “Arab Charade”.

Posted on February 21, 2012 by christoflehmann

On 26 February the People of the Syrian Arab Republic will hold a referendum about a carefully crafted draft constitution. (1) A draft constitution that renders more liberties and rights to all people of Syria, than the constitutional rights enshrined in the constitutions of Saudi Arabia and Qatar. Arab neighbors that are at the forefront of a relentless covert war of terror and attempted subversion against Syria. Waiting for the referendum, and for the word “go”, are also 40.000 NATO mercenaries, the vast majority of them Arabs, who are massed in a military staging area along the Jordanian-Syrian Border, and ready for the attempt to unleash a campaign of murder and terror that is supposed to become the “event” which those who are waging the war on Syria need to stage a media campaign that will propagandize citizens of NATO member states into “demanding” that NATO will wage yet one more “humanitarian war”.

Had Western Main Stream Media´s journalists a grain of integrity, they would long ago have picked up on reports that NATO is manufacturing the Arab Spring, that a NATO created army of chaos, terrorism, unspeakable suffering and death is massed inside Syria and along it´s borders, in Turkey, in Jordan, heavily supported by Saudi Arabia, Qatar, the new Libyan government and army that recently has liberated tens of thousands of black Libyans to death; but rather than picking up on those reports, those who make time for them selves to look behind the matrix of carefully crafted propaganda see  nothing of it but propaganda. Carefully Crafted Propaganda. Is it surprising ? Of course not. Anyone who is above the age of 25 and has not yet understood the intricate relationship between Main Stream Media and Intelligence Services as well as powerful lobbies is so deeply asleep, that attempts to wake them up feel like fighting with windmills. 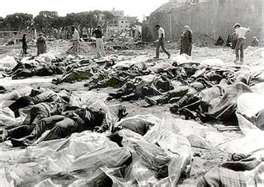 With the Western Main Stream Media that have denigrated Arabs, and in particular Palestinians as sub-human savages, (2) singing to the tact of Zionism; with the Muslim Brothers and Al Qaeda dancing with NATO and Mossad; with contingents of Special Forces maintaining deniable command responsibility and oversight; and with the bulk of those ready to unleash a massacre on Arabs in Syria being Arabs, the situation is reminding me of  three days of sheer hell, which are forever imprinted in my memory and still can make me tremble from shock and rage, the hell of Sabra and Shatila.

What is most shocking for me today is remembering the cries and shouts of Palestinian men, women and youth, shouting “where are the Arabs, where are the Arabs, why did they desert us “. Yes, the Israeli Army had invaded Lebanon and Beirut. Yes, the Israeli Army had surrounded and sealed of Sabra and Shatila, and yes there were Israeli troops inside Sabra and Shatila. Yes, Israeli officers, first and foremost Ariel Sharon had command responsibility.

When that is said, Arabs must face the fact, that the bulk of the rapes, murders and massacres were committed by Arabs. By Arabs who were dancing a dance macabre with their Zionist friends. The fact that there are by far too many Arabs who are willing agents of Zionism and US-Imperialism must and can only be faced and addressed by Arabs.  This much denied and uncomfortable truth may feel like a slap in the face for many Arabs, and one can hope it wakes them up from their slumber and comfort of blaming all evils on foreign elements. Foreign elements, as was the case in Sabra and Shatila, use Arabs to murder Arabs; willing Arabs. It is a truth that leaves Arabs with two choices. Face it and stand united as Arabs, or continue being laughed at by Zionists and Imperialists who strip sale your nations and laugh while Arabs rape and murder Arabs wives, while Arabs destroy Arab nations, while Arabs torture Arabs, while Arabs sale out on anything Arab, including Palestine.

The truth at the heart of the Arab matter is, that there are very few Arabs left who actually work in the interest of Arabs, and they are not to be found within the chambers and corridors of the Arab League. There are but a few remaining political parties and organizations left in Palestine, in Jordan and Lebanon, in Iraq which was devastated for it´s pan-Arab stance, who are proponents of the pan-Arabist, anti colonialist, anti-imperialist cause. Egypt, once perceived as the mother of Arab nations and the Arab national liberation has turned into an old muttering grandmother, to be ruled by military and Muslim Brothers who both have nothing better in mind for the future of their people than to invite the IMF for advise how to enslave and usurp Egyptians. The only remaining nation, which consequently has been and still is a proponent of Arab liberation and independence is Syria, and it has been, and is paying a high price for remaining the bastion that prevents full dominance and hegemony of Zionist and US Imperialist interests in the region. 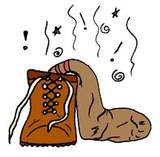 That said, the Syrian Draft Constitution is refreshing. It is as if Syria is picking up an old, worn out, smelly Zionist shoe, and is slapping it into the faces of the Arab League and the entire entourage of the Arab Charade radiating from and around it. Extracts from the preamble are paragraph by paragraph slaps in the faces of treason and Arab Quislings.

“Arab civilization, which is part of human heritage, has faced through its long history great challenges aimed at breaking its will and subjecting it to colonial domination, but has always risen through its own creative abilities to exercise its role in building human civilization.”

“The Syrian Arab Republic considers international peace and security a key objective and a strategic choice, and it works on achieving both of them under the International Law and the values of right and justice.”

“The Syrian Arab role has increased on the regional and international levels over the past decades, which has led to achieving human and national aspirations and achievements in all fields and domains. Syria has occupied an important political position as it is the beating heart of Arabism, the forefront of confrontation with the Zionist enemy and the bedrock of resistance against colonial hegemony on the Arab world and its capabilities and wealth. The long struggle and sacrifices of our people for the sake of its independence, progress and national unity has paved the way for building the strong state and promoting cohesion between the people and their Syrian Arab army which is the main guarantor and protector of the homeland’s sovereignty, security, stability and territorial integrity; thus, forming the solid foundation of the people’s struggle for liberating all occupied territories.”

To those young, idealistic men who are waiting in the military staging areas outside Syria, and those already taking actively part in the attempted subversion one is tempted to say: “It is up to you to decide if you wish to be remembered as Soldiers of Zionism and proponents of an endless Sabra and Shatila in the entire Arab Region. A Super Sabra and Shatila, where Arab massacres Arab and Arabs rape Arabs wives while Zionists and Imperialists laugh behind your back”.

To those Muslim Brothers, Al Qaeda Cadres, to the  Saudi, Qatari, and Jordanian Aristocrats of Her Majesty Queen Elisabeth’s and the City of London´s Mercy, to those dressing in Arab Dress at Arab League´s meetings while selling everything that is truly Arab to Zionism ? “High Treason and a Disgrace for the entire Arab People“. “A smelly old Zionist Shoe for you.”

Christof Lehmann is the founder and senior editor of nsnbc. Christof Lehmann is a political writer, psychologist, and independent political consultant on a wide range of issues, including conflict and conflict resolution, negotiations, security management, crisis management. His articles are published widely in international print and online media and he is a frequent contributor to radio and TV programs. He is a lifelong advocate for human rights, peace and international justice and the prosecution of war crimes - also those committed by privileged nation. In September 2011 Christof Lehmann started the blog nsnbc in response to what he perceived as an embargo on truth about the conflict in Libya and Syria. In 2013, he plans to transform nsnbc into an independent, daily, international online newspaper.
View all posts by christoflehmann →
This entry was posted in Middle East, Politics, World and tagged A Collection of Reflections by Christof Lehmann, Al Qaeda, Anti-Imperialism, Arab Aristocracy, Arab League, Arab Nation, Arab Socialism, christof lehmann, Colonialism, Dr. Christof Lehmann, Egypt, global security, IMF, imperialism, Israel, Jordan, LIFG, Middle East, Modo-Colonialism, Muslim Brotherhood, NATO, NATO mercenaries, nsnbc, nsnbc-nsnbc, Occupation of Palestine, Palestine, pan-Arabist, Sabra and Shatila, Shoe, shoe throwing, Syria, syrian arab republic, Syrian Constitution, Treason, Turkey, war crimes, war on syria, zionism. Bookmark the permalink.

11 Responses to Syria: A Zionist Shoe in the Face of the “Arab Charade”.