The ‘Accessory’ Allies in the War on Iran: What’s in it for Azerbaijan?

Posted on February 18, 2012 by nsnbc international

With every passing day since the beginning of US operations in preparing the ground for invading its ultimate prize, Iran, Azerbaijan’s status as the key accessory has been rising. Of course, the mainstream media has intentionally and very conveniently placed Azerbaijan in the blind spot of its rearview mirror in accordance with their long-established modus operandi as concoctors of Washington-created smoke and mirrors. 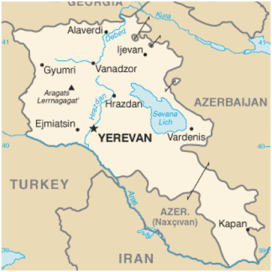 Last month Boiling Frogs Post broke the newly brewing story-line in the war propaganda against Iran involving an alleged Iranian terror plot in Azerbaijan, and had a follow up on the emerging ‘alleged’ details in the ‘alleged’ plot claiming Israeli diplomats and religious figures were the intended targets of the ‘alleged’ Iranian assassination plot. We also provided analysis on the mainstream media spin on these developments here, and emphasized the timing and way-too-familiar false flag quality of the ‘alleged’ plot.

Last week, following the ‘alleged’ Iranian terror plot, another significant report on Azerbaijan’s link to Mossad operations against the Iranian government came to light. Briefly, that is. The London Times reported that Israel’s Mossad has been using Azerbaijan as a hub to spy on the Islamic Republic, citing testimony from a still- anonymous Mossad agent:

“This is ground zero for intelligence work,” Shimon told the Times. “Our presence here is quiet, but substantial. We have increased our presence in the past year, and it gets us very close to Iran. This is a wonderfully porous country.”

But again, no follow up on this significant report. The story was conveniently ignored and put aside by the Western media. You’d think in this day in and day out frenzied reporting on Iran someone would at least look into this strategically positioned Iran neighbor and its ever-increasing role in the Iran scenario at play. At least one would expect the obvious question of ‘What’s in it for Azerbaijan’ to be asked; even rhetorically. But no – not a peep. So I will raise the question: what’s in it for Azerbaijan?

The following excerpts from a recent commentary on Azerbaijan’s ever-increasing role in the West’s war on Iran operation is a good starting point:

As the Arab Spring approaches Iran, Azeris believe they can be an accessory to the Western plan and become the first beneficiary of a potential Iranian disintegration. Former government advisor Vafa Guluzadeh has stated recently that “had there been a single US military base on our territory, our neighbors would not dare to use the language that they are talking to us with.”

Israel has been fulfilling that void through its military advisors and selling of weapons, including unmanned drones, which are not only directed at Karabagh, but also at Iran in case of a major confrontation in the region. The “Arab Awakening” or regime change in countries hostile to Israel is being achieved by imploding those countries internally using sectarian fault lines. Shiites, Kurds and Sunnis were pitted against each other to destroy Iraq. In Libya, tribal differences became handy for the plan and these days the Sunni majority in Syria is being armed and organized by surrogate Turkey against the ruling Alevis to topple Bashar al Assad’s regime.

Since the pattern of this plan is obvious, there is no doubt that Iranian Azerbaijan will be used to destabilize the Iranian regime and achieve its eventual demise. That is why appetites are being whetted to benefit from a potential collapse of neighboring Iran. The Baku leadership is a willing partner in the designs to bring regime change in Iran, with the resulting dismemberment of its territory.

The commentary brings attention to a very important factor completely ignored by the government and corporate-funded US news and think tank communities and their good-for-nothing hollow but pompous analysts and experts.

Iranian Azerbaijan is a region in northwestern Iran. The region is referred to by some as Southern Azerbaijan. As a side note, my father was born in this region. Iranian Azeris are a Turkic-speaking people of mixed Caucasian, Iranian and Turkic origin who number 16 to 25 percent of Iran’s population, and are the largest group in Iranian Azerbaijan, while Kurds are the second largest group.

Using sectarian divisions in countries targeted for invasion by our government has been an almost always-used vehicle. Iran is not an exception. Israel and the United States have been hard at work with both the Kurdish and the Turkish sects inside Iran. Let’s take a look at one such operation at work:

So it is not hard to see this as a major factor signifying Azerbaijan’s role as an accessory to our rabid war mongering government’s invasion plans. Our government, eager and desperate to take over one of the last and most important pieces of the Middle East Domino, has been exploring and exploiting every single faction: Kurds, Iranian Turks, MEK, and even the sissy son of the ruthless Shah Reza Pahlavi and his senile entourage here in Washington DC.

Then there are all sorts of related facts when it comes to Azerbaijan and its role as a Western Powers’ pet boy. Just a cursory glance at Azerbaijan related developments and news for the last week is sufficient to establish its Pet-Boy status, so let’s look at a few:

NATO Cooperates with Azerbaijan in Energy & War on Terror

Oh, there’s so much on Azerbaijan-NATO-US partnerships. And there are those usual payoffs for the AZ rulers (not the people) as well:

Azerbaijan to be Represented in G-20 for the First Time

Azerbaijan’s WTO Membership to be Resolved by 2014

… and so much more, yet so little in the media. We will continue our coverage and keep you posted.

nsnbc international is a daily, international online newspaper, established on 25 February 2013. nsnbc international is independent from corporate, state or foundation funding and independent with regards to political parties. nsnbc international is free to read and free to subscribe to, because the need for daily news, analysis and opinion, and the need for independent media is universal. The decision to make nsnbc international freely available was made so all, also those in countries with the lowest incomes, and those inflicted by poverty can access our daily newspaper. To keep it this way, however, we depend on your donation if you are in a position to donate a modest amount whenever you can or on a regular basis. Besides articles from nsnbc's regular contributors and staff writers, including nsnbc editor and founder Christof Lehmann, it features selected articles from other contributors through cooperation with media partners such as Global Research, The 4th Media, AltThaiNews Network and others.
View all posts by nsnbc international →
This entry was posted in Analysis, Middle East and tagged asia, Azerbaijan, Boiling Frogs Post, global security, imperialism, Iran, Iraqi, Israel, kurdistan, Kurds, Middle East, NATO, NATO expansion, NATO Partnership programs, nsnbc, partnership For Peace, Russia, Sibel Edmonds, Terrorism, war on iran. Bookmark the permalink.
Loading Comments...
%d bloggers like this: