Posted on January 29, 2012 by nsnbc international 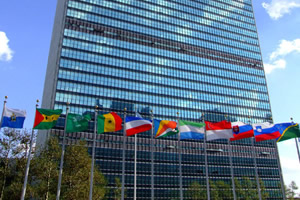 NEW YORK – A bag containing 16kg of cocaine was found at the United Nations headquarters in New York last week, police have said. The drugs were in a bag printed with a version of the UN symbol which arrived at the organisation’s mailroom, setting off a security alert. Spokesman Paul Browne said they seemed to have been delivered by accident. There was no name or address on the shipment sent from Mexico City through Cincinnati, he added.
The white bag raised suspicions when it was being scanned because a poor imitation of a UN logo had been stamped on it, apparently in an attempt to pass it off as official baggage. Inside the bag, the drug was hidden in hollowed-out notebooks, UN undersecretary-general for safety and security, Gregory Starr, told reporters.
“In my humble opinion this was the work of narcotics traffickers that were trying to ship something into the United States and their plan must have gone wrong,” Mr Starr was quoted as saying by AFP news agency.
UN spokesman Martin Nesirky told AP news agency that neither the UN nor anyone located at its headquarters was the intended recipient of the shipment. – bbc.co.uk.

nsnbc Editors Note: Was Hillary Clinton expected on a visit ?

nsnbc international is a daily, international online newspaper, established on 25 February 2013. nsnbc international is independent from corporate, state or foundation funding and independent with regards to political parties. nsnbc international is free to read and free to subscribe to, because the need for daily news, analysis and opinion, and the need for independent media is universal. The decision to make nsnbc international freely available was made so all, also those in countries with the lowest incomes, and those inflicted by poverty can access our daily newspaper. To keep it this way, however, we depend on your donation if you are in a position to donate a modest amount whenever you can or on a regular basis. Besides articles from nsnbc's regular contributors and staff writers, including nsnbc editor and founder Christof Lehmann, it features selected articles from other contributors through cooperation with media partners such as Global Research, The 4th Media, AltThaiNews Network and others.
View all posts by nsnbc international →
This entry was posted in News, Northern America, World and tagged Cocaine, drug trade, New York, nsnbc, The Herald, UN, United Nations. Bookmark the permalink.
Loading Comments...
%d bloggers like this: