Posted on January 20, 2012 by nsnbc international 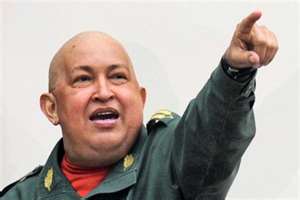 Chavez made the comments following a State Department briefing last week, in which the body’s spokesperson, Victoria Nuland, warned Latin American countries that they would be liable to U.S. sanctions if they were to use Iranian banks or purchase Iranian oil.

”If [decisions behind closed doors] are going to take those countries in the direction of buying more Iranian crude oil and making more use of the banks, then they make themselves vulnerable to U.S. sanctions,” said Nuland, who added that the countries in question wouldn’t have “any doubt that this is not something that the U.S. would think was helpful to the overall global policy”.

“We have…with a number of these [Latin American] countries…difficulties that go well beyond this [and] that need to be worked through,” concluded Nuland.

Addressing viewers on state television channel VTV, Chavez criticised Nuland’s statements and cited them as proof of continued U.S. neo-colonialism in the region.

“This decision is an absurdity…it’s the same absurd history of the U.S., trying to look at us like their back yard and wanting to keep controlling the destinies of Venezuela, Cuba, Ecuador and the whole of Latin America,” said the Venezuelan president.

“We are free countries…The United States will end up being what Mao (Tse Tung) said, they will become a paper empire and we; steel tigers,” he added.

nsnbc international is a daily, international online newspaper, established on 25 February 2013. nsnbc international is independent from corporate, state or foundation funding and independent with regards to political parties. nsnbc international is free to read and free to subscribe to, because the need for daily news, analysis and opinion, and the need for independent media is universal. The decision to make nsnbc international freely available was made so all, also those in countries with the lowest incomes, and those inflicted by poverty can access our daily newspaper. To keep it this way, however, we depend on your donation if you are in a position to donate a modest amount whenever you can or on a regular basis. Besides articles from nsnbc's regular contributors and staff writers, including nsnbc editor and founder Christof Lehmann, it features selected articles from other contributors through cooperation with media partners such as Global Research, The 4th Media, AltThaiNews Network and others.
View all posts by nsnbc international →
This entry was posted in Geo-Politics, Latin America - Caribic, News, Northern America and tagged Chavez, imperialism, Latin America - Caribic, neo-colonialism, Sanctions, USA, venezuela. Bookmark the permalink.
Loading Comments...
%d bloggers like this: