Settlement Construction Causing the Slow Demise of the Two-State Solution

Posted on January 17, 2012 by nsnbc international

A tour of several European Capitals by the Palestinian President has given several politicians a sterner voice. This is welcome at a time when the two-state solution is steadily slipping through the fingers of the world leaders, and will soon be out of reach completely; at least through the medium of negotiations and peace. There is always war of course, which must be avoided at all costs.

Palestinian President, Mahmoud Abbas, is on day two of a four-day European tour to London, Berlin, and Moscow. Yesterday he met with the British Prime Minister, David Cameron; Foreign Secretary, William Hague; and Nick Clegg, the leader of the Liberal Democrat Party and Deputy Prime Minister.

On Tuesday, January 17, he is expected to meet German Chancellor Angela Merkel, and on Thursday he will meet with Russian President, Dmitri Medvedev. The meetings are to discuss the exploratory talks between Israeli and Palestinian negotiators currently underway in Amman.

Mr. Cameron warned that the “Road Map” to peace may not prove sustainable if the deadlock in the negotiations continue. After meeting with President Abbas, the British Premier stated that “We think that time, in some ways, is running out for the two-state solution, unless we can push forward now, because otherwise the facts on the ground will make it more and more difficult, which is why the settlement issue remains so important.”

Earlier in the day, his deputy launched a strongly worded attack, voicing his concerns regarding the construction of settlements within the West Bank and East Jerusalem, which are illegal under international law. He claimed that Israel was carrying out “deliberate vandalism” by continuing with its settlement projects.

Standing next to President Abbas, Clegg stated that “Once you’ve placed physical facts on the ground that makes it impossible to deliver something that everyone has for years agreed is the ultimate destination… it is an act of deliberate vandalism to the basic premise on which negotiations have taken place for years and years and years.”

Israeli Foreign Ministry Spokesperson, Yigal Palmor, disagreed with Nick Cleggs choice of language, and affirmed that “”It would be much better to contribute to peace by encouraging the fragile revival of Israeli-Palestinian talks rather than engaging in gratuitous bashing.”

This is not the first time European countries have suffered criticism from Israel after voicing concerns regarding Israeli policies. At the end of 2011, Israeli strongly rebuked several European states, including Great Britain, France, Germeny, and Portugal, who spoke out at the United Nations Security Council, condemning the announcement by the Israeli government of new settlement projects.

An Israeli Foreign ministry official responded with the suggestion that should the European powers not focus on the larger problems in the Middle East, such as violence in Syria and Iran’s nuclear programme, then they “”are bound to lose their credibility and make themselves irrelevant.” This forced the Israeli government to rebuke the Foreign Ministry for speaking out of turn, and labeling many European powers (who Israel relies upon as allies) as “irrelevant”.

An internal European report released earlier this year strongly advocates Israel to alter its stance towards Area C, the section of the West Bank amounting to approximately 59% of the land. The report claimed that Israeli actions, such as house demolitions, settlement construction and its relentless bureaucratic security measures, undermines the area with a majority Palestinian population, and will result in the “closing [of] the window” for reaching a two-state solution.

The West Bank is divided in three zones, Area’s A, B and C. Area’s A and B fall under varying Palestinian control, from security and civil administration and services, with Area C comprising full Israeli military and civil control.

British daily newspaper, The Independent, stated that “If current trends are not stopped and reversed, the establishment of a viable Palestinian state, within pre-1967 borders, seem[s] more remote than ever.” 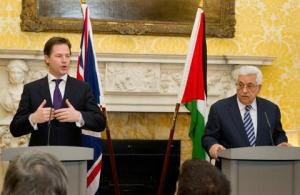 The report, published last week, claims that there has been a twenty percent rise in construction starts in West Bank settlements, after they began work on 1,850 new housing units, and continued building on another 3,500 West Bank units during 2011. Israel also approved the construction of 3,690 homes in East Jerusalem.

The Palestinians want East Jerusalem as part of a future Palestinian state, since the area lies within the Green Line, but after Israeli captured the entire city during the Six Day War in 1967, they annexed the city, and in 1980 the Israeli Knesset declared Jerusalem to be the eternal and undivided capital of Israel.

nsnbc international is a daily, international online newspaper, established on 25 February 2013. nsnbc international is independent from corporate, state or foundation funding and independent with regards to political parties. nsnbc international is free to read and free to subscribe to, because the need for daily news, analysis and opinion, and the need for independent media is universal. The decision to make nsnbc international freely available was made so all, also those in countries with the lowest incomes, and those inflicted by poverty can access our daily newspaper. To keep it this way, however, we depend on your donation if you are in a position to donate a modest amount whenever you can or on a regular basis. Besides articles from nsnbc's regular contributors and staff writers, including nsnbc editor and founder Christof Lehmann, it features selected articles from other contributors through cooperation with media partners such as Global Research, The 4th Media, AltThaiNews Network and others.
View all posts by nsnbc international →
This entry was posted in Analysis, Middle East, Politics and tagged cameron, Clegg, E.U., Fatah, global security, IMEMC, Israel, Israeli Settlements, Mahmoud Abbas, Middle East, middle east conflict, nsnbc, nsnbc-nsnbc, Occupation of Palestine, P.A., Palestine, Road Map, Settlements, war crimes. Bookmark the permalink.
Loading Comments...
%d bloggers like this: