Putin Accuses US In Murder Of Ghadafi.

Posted on December 19, 2011 by nsnbc international 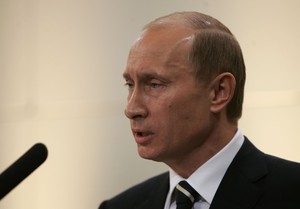 Russia’s Vladimir Putin implicated Washington today in the killing of Libyan dictator Muammar Gaddafi and launched a tirade against Senator John McCain in an extraordinary attack on US policies.

The Russian premier used his annual televised phone-in to unleash the type of no-holds-barred attack that characterised his 2000-2008 term as president and threatens to shadow his expected return to the Kremlin in March polls.

Putin turned stone-faced when asked about a tweet from McCain — one of Washington’s fiercest critics of Putin — warning Russia it faced an “Arab spring” revolt over the disputed December 4 parliamentary elections.

“Mr McCain fought in Vietnam. I think that he has enough blood of peaceful citizens on his hands. It must be impossible for him to live without these disgusting scenes anymore,” Putin said.

“Who did this?” Putin said in reference to Gaddafi. “Drones, including American ones.

“They attacked his column. Then using the radio — through the special forces, who should not have been there — they brought in the so-called opposition and fighters, and killed him without court or investigation.”

The Pentagon immediately dismissed the charge as “ludicrous”.

“The assertion that US special operations forces were involved in the killing of Colonel Gaddafi is ludicrous,” spokesman Captain John Kirby told AFP on the sidelines of US Defence Secretary Leon Panetta’s visit to Iraq.

“We did not have American boots on the ground in the Libya operation. All our support was done through the air and on the seas.”

Russia had initially allowed Nato’s air campaign in Libya to go ahead by abstaining in a UN Security Council vote. But it then vehemently criticised a campaign that Putin at one stage compared to a Western “crusade”.

nsnbc international is a daily, international online newspaper, established on 25 February 2013. nsnbc international is independent from corporate, state or foundation funding and independent with regards to political parties. nsnbc international is free to read and free to subscribe to, because the need for daily news, analysis and opinion, and the need for independent media is universal. The decision to make nsnbc international freely available was made so all, also those in countries with the lowest incomes, and those inflicted by poverty can access our daily newspaper. To keep it this way, however, we depend on your donation if you are in a position to donate a modest amount whenever you can or on a regular basis. Besides articles from nsnbc's regular contributors and staff writers, including nsnbc editor and founder Christof Lehmann, it features selected articles from other contributors through cooperation with media partners such as Global Research, The 4th Media, AltThaiNews Network and others.
View all posts by nsnbc international →
This entry was posted in Africa, Europe, News, Northern America and tagged Africa, African Affairs, Ghadafi, global security, international security, Libya, libyan war, muammar ghadafi, NATO, NATO crimes, northern africa, nsnbc, nsnbc-nsnbc, Panetta, Political Assassination, Putin, Putin Accuses US In Murder Of Ghadafi, USA, Vladimir Putin, war crimes. Bookmark the permalink.

1 Response to Putin Accuses US In Murder Of Ghadafi.