Posted on October 30, 2011 by christoflehmann

While Southern Libya is mainly under Libyan Control, the war in the North continues and becomes more complicated by the day. Infighting and disputes over power and position between fractions that rule Northern Libya under their guns increases. International pressure to form an inclusive government fuel the disputes. The long standing Syrian ally Iran is pushing for power in Libya, and suspicions that Iran may abandon it´s ally as well as Hezbollah are growing. The internal tension that plagues Iran is palpable. Analysts wonder about Iran´s U-Turns. Colonialists are experts at disguising them selves as revolutionary forces. When an old drag costume is worn out and the deception becomes to obvious it may change to a new drag. The show, however, is still the same. By Dr. Christof Lehmann

Southern Libya remains under control of the Libyan Resistance and the fighting in Northern Libya continues. Tripoli was again shaken by explosions and fighting in several districts and around several checkpoints, established for “security” and for implementing the project to disarm civilians. The fighting in Bani Walid continues with sporadic attacks, while a regular battle rages in Wadi Dinar.

The Transitional National Counsel is increasingly coming under diplomatic pressure. Both the Pan African Parliament and the African Union are calling on the TNC to form an all inclusive government (1). Also the United Nations Security Counsel is pressuring the TNC to implement inclusive reforms and government (2). The international pressure for inclusive initiatives, however, seem to spurn infighting rather than inclusiveness.

According to Algeria ISP a rebel fraction in Misurata has categorically refused to hand their weapons over to the new Libyan Ministry of Defense before they have been granted special privileges and guaranties (3). According to a well informed nsnbc source in Tripoli, the Al Qaeda associated Libyan Islamic Fighting Group, commanded by Abdelhakim Belhadj (4), is demanding that it will be guarantied the post of Prime Minister in an interim government. The nsnbc source also confirmed the long held suspicion that the Libyan Islamic Fighting Group (LIFG), is not only heavily supported by the CIA and MI6, but that it is heavily supported by both Hezbollah and Iran.

Many progressive media have since wondered how Iranian President Mahmoud Ahmedinejad could make what is by many described as a U-Turn in Iranian Foreign Politics that usually decries the US as the Great Satan, and lobbies for nations rights to self determination without interference into internal affairs. Theheran has not only made a U-Turn with respect to Libya but also with respect to it´s most long standing ally Syria. In July Iran asserted it´s role in the Middle East, when demanding that Turkey ceases to destabilize the Syrian Government (5). In early September 2011, however, Ahmedinejad criticized Al-Assad for it´s violent crackdown on peaceful protesters, and emphasized that the Syrian people should have the right to determine their own future (6). It is right out impossible, that Theheran has missed that the subversion in Syria is heavily backed by NATO, and western intelligence services who are financing, training, and arming Muslim brotherhood insurgents to destabilize Syria (7). It is also extremely unlikely that Theheran has missed the fact that the National Transitional Counsel of Syria is heavily backed and financed by Western intelligence services and part of a US / NATO Unconventional Warfare Program (8).

The Iranian U-Turns have baffled many and can not be understood without understanding the following aspects of Iran´s recent and contemporary history. The fact that the Islamic Revolution was heavily supported by Western Intelligence Services. The fact that the US and Iran have been involved in underhanded deals before. The fact that Iran is plagued by an internal dispute. 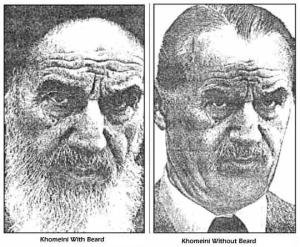 Khomeni Before and After

For understanding contemporary Iranian politics it is necessary to understand that the ousting of the Shah was a CIA and MI 6 operation from beginning to end. Fearing a drastic fall in oil prices (9), fearing that the reign of the Shah was unstable, and the risk that he would be replaced by a Moscow friendly government, Western Intelligence Services followed standard operations procedures, finding an internal factor for destabilizations. This internal factor for destabilization was Ayatollah Khomeini and his network both inside Iran and abroad. Installing a religious Iranian government was the best choice for curbing socialism in the Middle East. Without heavy support by Western Intelligence Services, the Islamic Revolution in Iran would most likely never have manifested (10). The Iran Contra Scandal provides precedence for underhanded dealings between the Ayatollah Run Government in Theheran and a US-Administration (11). A underhanded agreement about arms between Iran and the US would not be unprecedented either. The current Iranian Support of the LIFG in Libya, the support of the Muslim Brotherhood in Syria to destabilize both countries are actually not surprising after all. Neither would it be surprising if one of Iran´s commissions for it´s services in Libya would be Russian Missiles attained with the help of “The Great Satan“. Missiles  which reportedly have disappeared from Libya, being en route to Iran (12). Another commission would be greater influence in Northern Africa, and an Islamic Syria.

The final element for understanding the Iranian U-Turn is, that Iran is dealing with an intense internal dispute between the extremely powerful conservative elements within the religious leadership and more moderate or progressive forces. To anticipate that this internal dispute would not be reflected by Iran´s overt and covert Foreign Policy would be more than naive.

In June 2011, President Ahmedinejad received a clear warning from the Supreme Leaders Representative to the Revolutionary Guards Ali Saidi. Saidi warned Ahmedinejad of the influence of a “deviant fraction” in his government that had distanced them selves from the values of the Islamic Revolution. Saidi warned, that if any one of the leaders of the three branches of government crosses “red lines” the Supreme Leader must take action against that individual.

With respect to Hezbollah Saidi said that the support of the Hezbollah Nation and the Clerics for the government and the president is dependent on their own loyalty to the rule of the religious jurisprudence. Saidi criticized Ahmedinejad for his attitude towards the Supreme Leader´s instructions in the Iranian Intelligence Minister´s dismissal, saying that the Iranian people, the clerics, and the leaders had expected the President, who was elected based on his loyalty to the Supreme Leader, to fully comply with the desires of Khamenei without having to be given an explicit written request (13). The conservative Iranian leaderships move towards asserting absolute control over Iranian internal and foreign politics is further demonstrated by the establishment of what was called “Expediency Council”. The council was established by Khamenei to assert his control over all three branches of government (14).

The current support of the TNC and the LIFG in Libya and the threat against Syria, are but a symptom of an ongoing internal Iranian dispute, where the CIA and MI6 backed religious leadership is having the upper hand. The question how the current inner Iranian dispute and current Iranian foreign policy influences the security of Iran, Syria and Lebanon in an expected attack begs for an answer. It is most likely that Khamenei´s and Saidi´s warning to Ahmedinejad has been extended to Nazrallah and Hezbollah, and there are signs that Syria can´t rely as much on Hezbollah as it has done for years (15) .It seems both CIA and MI6 are successful at what they are best at, to divide and conquer. The laughing man behind the curtain will be Israel. We are not in Cansas anymore.

Christof Lehmann is the founder and senior editor of nsnbc. Christof Lehmann is a political writer, psychologist, and independent political consultant on a wide range of issues, including conflict and conflict resolution, negotiations, security management, crisis management. His articles are published widely in international print and online media and he is a frequent contributor to radio and TV programs. He is a lifelong advocate for human rights, peace and international justice and the prosecution of war crimes - also those committed by privileged nation. In September 2011 Christof Lehmann started the blog nsnbc in response to what he perceived as an embargo on truth about the conflict in Libya and Syria. In 2013, he plans to transform nsnbc into an independent, daily, international online newspaper.
View all posts by christoflehmann →
This entry was posted in Africa, Geo-Politics and tagged Africa, African Affairs, Al Qaeda, Assad, AU, belhadj, Iran, Libya, Libyan Government, LIFG, Middle East, Middle Eastern Affairs, Muslim Brotherhood, NATO, NTC, PAP, Syria, The Old Colonial Project in New Drag, TNC, UN. Bookmark the permalink.