Posted on September 28, 2011 by christoflehmann

The Danish welfare model has been wrecked long ago, by privatizations and austerity cuts. Denmark has one of Europe’s most xenophobic and inhumane immigration laws. According to Amnesty International Denmark is one of the countries with the most wide spread use of torture. The image of a land of milk and honey with a population that is a little backwards in European standards and humanitarianism “does not fit”. But when analyzing how it can be that Denmark has participated in every NATO war campaign where Al Qaeda was used as mercenary army since Yugoslavia, there is more to it than just something being rotten in the State of Denmark. 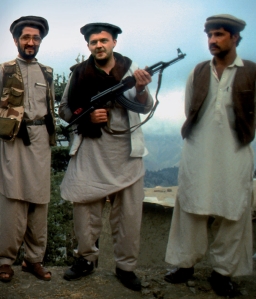 Little is it known, and a lot is being done to cover up, that the Danish prime Minister, Lars Løkke Rasmussen, whose unified Danish Parlament voted for Danish participation in the NATO enforcement of UN Resolution 1973 has been supporting the Afghan Taliban since 1988.

In 1988 the the 24 year old Lars Løkke Rasmussen traveled to Afghanistan to convey his own and his parties political and economic support to Taliban leaders. Lars Løkke was then proudly posing together with the so called “freedom fighters” holding an AK 47 Kalashnikov assault rifle. It was at about the same time, that member of the Al Qaeda associated Libyan Islamic Fighting Group, Abdelhakim Belhadj, who is now the Supreme Commander of the Tripoli Military Counsel arrived at the same location. 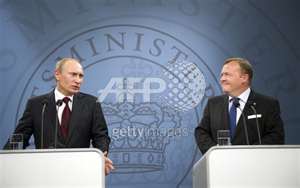 The Speaker of Løkke Rasmussens Party Venstre Foreign Affairs Counsel called the Taleban in 1988 “Freedom Fighters” Venstre has not only provided verbal support to the Taliban, but as many Danish organizations throughout the 80th substantial material support. One needs to understand this background before it is possible to understand the outrage of Russian Prime Minister Vladimir Putin, when he at a meeting with Løkke Rasmussen made it unequivocally clear that NATO is grossly overstepping it´s UN  mandate in Libya. Throughout the 1980´s many danish Organization had yearly protest demonstrations outside the Soviet Embassy in Copenhagen. Youth committees with members like Lars Løkke Rasmussen, and now Chairman of the Danish Peoples Party Pia Kjærsgaard gathered 600.000 DKK for supporting the “freedom fighters. And this is just the little that is known. Pia Kjærsgaard and Lars Løkke Rasmussen are known for their xenophobic anti muslim, anti foreigner and anti immigration politics, and their consequent support of any war Denmark has been taking part in since Yugoslavia.

2011; Lars Løkke Rasmussen and Pia Kjærsgaard a stern Israel supporter are at it again. Lars Løkke has become Prime Minister of Denmark; taking over the helm from now NATO Secretary General Anders Fogh Rasmussen.  A unified Parliament is voting yes for Danish Participation in the NATO enforcement of UN Resolution 1973 on Libya.Pia Kjærsgaard has become the leader of the Danish peoples Party. A populist party that has the decisive votes on every decision in the Danish parliament. Denmark sends F 16´s to Libya. F 16´s that are taking part in the assault on Libyan air defenses from day one.

Lars Løkke and Pia are at it again; supporting a war with mercenaries that the CIA has recruited via Afghanistan for another humanitarian war, this time on Libya.

Pia Kjærsgaard is at it again. After the massacres and beheading of Serbs by Al Qaeda Fighters in Kosovo Metochia, the Taleban and Al Qaeda mercenaries in Libya ethnically cleanse a Libyan town with 20.000 Black Libyans disappearing.

Surly Lars Løkke Rasmussen has learned a few tricks from Mullah Omar when he is speaking from the priests chancel in a Danish Church, declaring ” We go to War With Libya“. Denmark is a main contributor to the Anglo-American Empires Crusade and Neo-Colonial Projects throughout the world. No milk and honey; No welfare model; No Fairy tales; No Existentialist Humanitarianism; Just Brute Force and War-crimes under the guise of humanitarianism, and sanctioned by a UN that long has lost any credibility. UN-Humanitarianism enforced by a NATO whose Secretary Anders Fogh Rasmussen began the Danish participation in the Anglo-American Crusades when he was Prime Minister of Denmark.There is more than just “something” rotten in the state of Denmark. 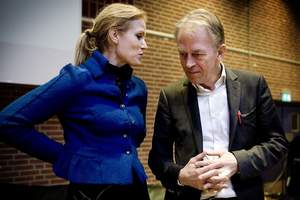 Will the newly elected left wing, Social Democratic- and Social Peoples Party Government under the leadership of new P.M. Helle Thorning Schmidt and Villy Søvndahl bring abut substantial change ? Probably the austerity cuts will be done under the motto of solidarity, the xenophobic politics towards foreigners will continue under the guide of humanitarianism, and the dirty double dealings and war crimes will cuntinue relentlessly, but under the motto of solidarity with the freedom fighters of Libya.

26 September Muammar Ghadafi addressed the Libyan People. He is fighting among them, along with his sons. The amphibian assault on Sirte has failed. The NATO initiative stagnates. Whispers of defectors from the Libyan Government who want to defect from the Libyan TNC are getting louder. Whispers of diplomatic deals, now NATO and it´s Taliban and Al Qaeda mercenaries fail. If there is an honest broker to be found, it certainly is not one of the likes of soon former P.M. Lars Løkke Rasmussen.

Christof Lehmann is the founder and senior editor of nsnbc. Christof Lehmann is a political writer, psychologist, and independent political consultant on a wide range of issues, including conflict and conflict resolution, negotiations, security management, crisis management. His articles are published widely in international print and online media and he is a frequent contributor to radio and TV programs. He is a lifelong advocate for human rights, peace and international justice and the prosecution of war crimes - also those committed by privileged nation. In September 2011 Christof Lehmann started the blog nsnbc in response to what he perceived as an embargo on truth about the conflict in Libya and Syria. In 2013, he plans to transform nsnbc into an independent, daily, international online newspaper.
View all posts by christoflehmann →
This entry was posted in Europe, Opinion and tagged abdelhakim belhadj, Africa, African Affairs, Anders Fogh Rasmussen, anders forgh rasmussen, christof lehmann, clash of civilizations, Copenhagen, danish pm declares holy war on libya, danish pm send money to taliban, Danish PM suppots taleban danish pm supports Al Qaeda, danish pm with kalashnikov, denmark sends f 16 to lybya, Dr. Christof Lehmann, holy war on libya, lars løkke rasmussen, Libya, Libya Denmark and Dirty Double Dealings, massacre in libya, massacre on black, nsnbc, nsnbc-nsnbc, nsnbc.wordpress.com, Tripoli, United Nations UN done, war crimes, war on libya. Bookmark the permalink.